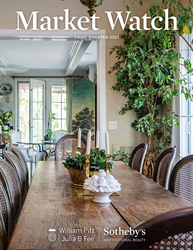 A report detailing market results for the third quarter of 2017 in Fairfield and Litchfield Counties and the Shoreline in Connecticut, the Berkshires in Massachusetts, and Westchester County, New York, has just been released by William Pitt and Julia B. Fee Sotheby’s International Realty, the company announced today.

The report found most of the markets the company serves either holding steady or trending ahead compared to the same time last year, with few exceptions. Westchester County’s sales levels were similar to 2016, both year to date and quarter over quarter. In comparing the first three quarters of each year, the market appeared steady with unit sales county-wide increasing by 3% and dollar volume by 2%, while comparing the third quarter of each year alone revealed a slight decline in unit sales of 2% even as volume rose by 11%. Broken out by region, sales in Southern Westchester were much like this time last year, with units flat and volume up 3% year over year, and units and dollar volume each declining a slight 1% quarter over quarter. Northern Westchester was one of the few market areas that experienced some decline, with units down 4% and volume 1% for the year, and units dropping 14% and volume 16% for the quarter. Pockets of vibrancy were found to exist in the region, most notably in Armonk/Byram Hills.

In Connecticut, Fairfield County has enjoyed healthy growth, with unit sales increasing by 5% and dollar volume by 10% year to date versus the same time in 2016, and units up by 3% and volume 10% quarter over quarter. In the southern county, the $1.5 to $3 million sector represents a particularly hot spot in the market. The Shoreline, including New Haven, Middlesex and New London counties, was also ahead of 2016, with the latter two witnessing a surge in waterfront activity. Year over year, unit sales stood above 2016 by 5% and dollar volume 9%, while units were up 3% and volume 11% quarter over quarter. In Litchfield County, the market was generally stable compared to last year, with year-to-date unit sales and dollar volume a slight 1% and 4% higher, respectively. After hitting its market peak earlier in the year, the market was down a bit for the quarter, with unit sales decreasing by 7% and volume 11%. An uptick in the high end continues to be observed in this area. Across the state line in Berkshire County, Mass., units were ahead of 2016 by 3% and volume 5% year over year, and units increased by 2% and volume 12% for the quarter. The recent flurry of activity in that area’s $550,000 to $750,000 range has persisted, and properties in the luxury segment are selling as well.

The report commented that the housing market is supported by a strong economy, noting that the most recent reading of the GDP indicated a rate increase of 3.1 percent, the fastest pace of growth in over two years. At the same time, the report stated, the job market is steadily improving, the stock market stands at an all-time high, and interest rates, though inching up slowly, remain low. Further, consumer confidence currently stands at 119.8 (1985=100) according to the Conference Board Consumer Confidence Index®, a figure that has seen small fluctuations throughout the year since a March peak of 125.6 but remains much higher than those levels reached in recent years.

“The fundamentals of the economy, which I refer to as our ‘True North,’ remain strong and point to continued momentum in the housing market,” said Paul Breunich, President and Chief Executive Officer of William Pitt and Julia B. Fee Sotheby’s International Realty. “Overall, the areas we serve remain healthy with robust sales activity, and as we have indicated in earlier reports this year, there is little in the forecast to suggest the forward movement will let up anytime soon. We are well positioned for a strong finish for the year as we head into the fourth quarter.”

About William Pitt and Julia B. Fee Sotheby's International Realty

California, Florida, Hawaii and Nevada timeshare sale, gifts and deed backs HUNTINGTON BEACH, Calif. (PRWEB) August 22, 2019 At the time of purchase from a resort, the owner enters into a contract to pay on-going […]