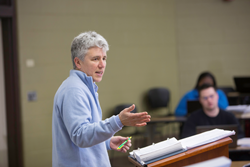 “Jennifer Levi is a nationally recognized expert on transgender legal issues, a gifted teacher, a prolific writer, a skilled advocate and a generous mentor. She literally ‘wrote the book’ on transgender family law,”

Western New England University School of Law professor and Director of GLAD, Gay and Lesbian Advocates and Defenders, Jennifer Levi has dedicated her career to fighting for the rights of gay, lesbian, bisexual, and transgender individuals and families. Two organizations will present Levi with prestigious awards for her pioneering legal work.

The American Bar Association Commission on Sexual Orientation and Gender Identity will honor Levi with its Stonewall Award. Named after the 1969 New York City Stonewall Inn police raid and riot which served as a turning point in the gay rights movement, the award recognizes lawyers who have considerably advanced lesbian, gay, bisexual and transgender individuals in the legal profession and successfully championed LGBT legal causes. The award will be presented during a ceremony in February at the ABA Midyear Meeting in Vancouver, British Columbia.

“Jennifer Levi is a nationally recognized expert on transgender legal issues, a gifted teacher, a prolific writer, a skilled advocate and a generous mentor. She literally ‘wrote the book’ on transgender family law,” said Mark Johnson Roberts, chair of the ABA Commission on Sexual Orientation and Gender Identity. “Levi has been instrumental in finding ways to use existing gender and disability laws to provide transgender people with the basic civil rights protections they would otherwise lack.”

Meanwhile, The State of Connecticut’s Commission on Human Rights and Opportunities (CHRO) will also honor Levi with the Constance Baker Motley Award for Excellence in Business or Law. Levi will be one of six individuals honored for promoting equality and fairness during the CHRO’s 2017 Leaders and Legends Awards November 16 at the Connecticut State Capitol. The award is named after legendary civil rights activist, lawyer, judge, and state senator Constance Baker Motley.

Levi serves as Professor of Law at Western New England University School of Law in Springfield, MA, and is a key contributor to the law school’s Center for Gender and Sexuality Studies, which serves as a focal point for work in a broad number of areas relating to gender and sexuality. Levi coedited Transgender Family Law: A Guide to Effective Advocacy, the first book to address legal issues facing transgender people in the family law context and provide practitioners the tools to effectively represent transgender clients.

“These awards are well-deserved. We are truly honored to have someone of Jennifer’s caliber on our faculty,” said Eric Gouvin, dean of Western New England University School of Law. “Our students benefit daily from Jennifer’s expertise and experience arguing precedent-setting cases in this rapidly-evolving area of the law.”

As a lead cocounsel in a recent lawsuit challenging President Trump’s ban on transgender persons in the military, Doe vs. Trump, Levi was thrilled this week when Judge Colleen Kollar-Kotelly, of the U.S. District Court for the District of Columbia, placed an injunction on the Trump Administration’s ban. “Transgender people are just as qualified to serve as anyone else,” said Levi. “This decision means that people who are currently in the military cannot be discharged just for being transgender, and transgender people have to be allowed to enlist in the military.”

In her work at with GLAD’s Transgender Rights Project, Levi has served as counsel on a number of cases establishing basic rights for transgender clients. She has also worked on several high-profile family law cases, including cases that established the right of same-sex couples to marry in Connecticut and Massachusetts. Levi serves on the Legal Committee of the World Professional Association for Transgender Health and is a founding member of both the Transgender Law & Policy Institute and the Massachusetts Transgender Political Coalition.

October 28, 2018 myadminsite Law Comments Off on Protecting Children This Halloween

According to the FBI, a child is abducted or reported missing every 40 seconds nationwide. SACRAMENTO, Calif. (PRWEB) October 27, 2018 It’s Halloween time once again. Children stroll around the neighborhood, dressed to scare, and […]

“The COVID-19 pandemic and a slumping economy, as well as attacks on the election process, have all intensified the need for voter education, voter mobilization, poll monitoring, and community activism,” says Ashley McDermott, a regional […]

October 30, 2020 myadminsite Law Comments Off on Mary Jones Selected as a 2020 Super Lawyers

It is a great honor to be selected for this prestigious recognition. AUSTIN, Texas (PRWEB) October 30, 2020 Austin Attorney Mary Jones has been named in the 2020 edition of Super Lawyers in the family […]