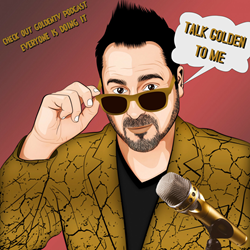 "So many people and business have launched podcasts as of late, we wanted to take an interactive approach utilizing new technology. We have teamed up with Sling Media L.L.C, and we will be recording and live streaming the shows through SlingStudio, the industry's first portable, wireless multi-camera broadcasting platform with 4K post-production support," said Marjorie Guaracho a Producer for the show.

“I have been using the term "Don't Google it, Golden it!” for many years now and it's a motto I will be bringing to the show. It does not mean I have the solutions for everything being discussed but it does mean I have an answer, not necessarily the correct one but it's my take and opinions," said Host Evan Golden.

ABOUT TALK GOLDEN TO ME
Talk Golden to Me launched May 23, 2019 and releases new episodes weekly. This podcast is dedicated to provide listeners with “Golden” content by delving into the trending world of influencers, entrepreneurs, professional athletes and more. Each guest is brought in to share their story, personal brand and discuss any upcoming projects they have emerging. There will be fun, games and contest giveaways coming soon call "Golden Giveaways" that will attract various listeners for a chance to win top of line prizes from iPads, sunglasses to vacations.

ABOUT EVAN GOLDEN
Evan Golden is most recognized for his work with MTV, Universal Studios and his break out role on Ivana Trump's reality TV show, "Ivana Young Man." Evan Golden also is a host for the TV Show Eye on South Florida and has been honored as South Florida's Young Leader in Philanthropy by Simply The Best Magazine, Men With Caring Hearts by the Florence Fuller Child Development Centers, Real Men Wear Pink Candidate by the American Cancer Society and winner of the 2018 Apogee Award by South Florida Business & Wealth Magazine.

For more information on how to be a guest on the show, contact series production coordinator via email MGuaracho(at)thebermanlawgroup.com or follow Host Evan Golden on Instagram @GoldenTV to provide feedback and ideas for the podcast.

ABOUT THE BERMAN LAW GROUP
The Law Firm, based in Boca Raton, FL is a full service law firm established in 2008. Evan Golden joined the law firm in 2014 to oversee the Marketing, Sports and Entertainment Division. He also sits on the board for the Berman Family Foundation. The studio is based in the firms mains offices of East Boca Raton.

Lewis Brisbois optimizes support services with BigHand With BigHand Now, we will achieve a new level of transparency that will enable us to make informed decisions on how tooptimize the support offered to our lawyers. […]

Paradatec In the last 12 months, our developers have been busy expanding our feature set to include even more mortgage-centric functionality. These advances include GSE-certified UCD file generation, bookmarked and annotated PDF file creation, and […]