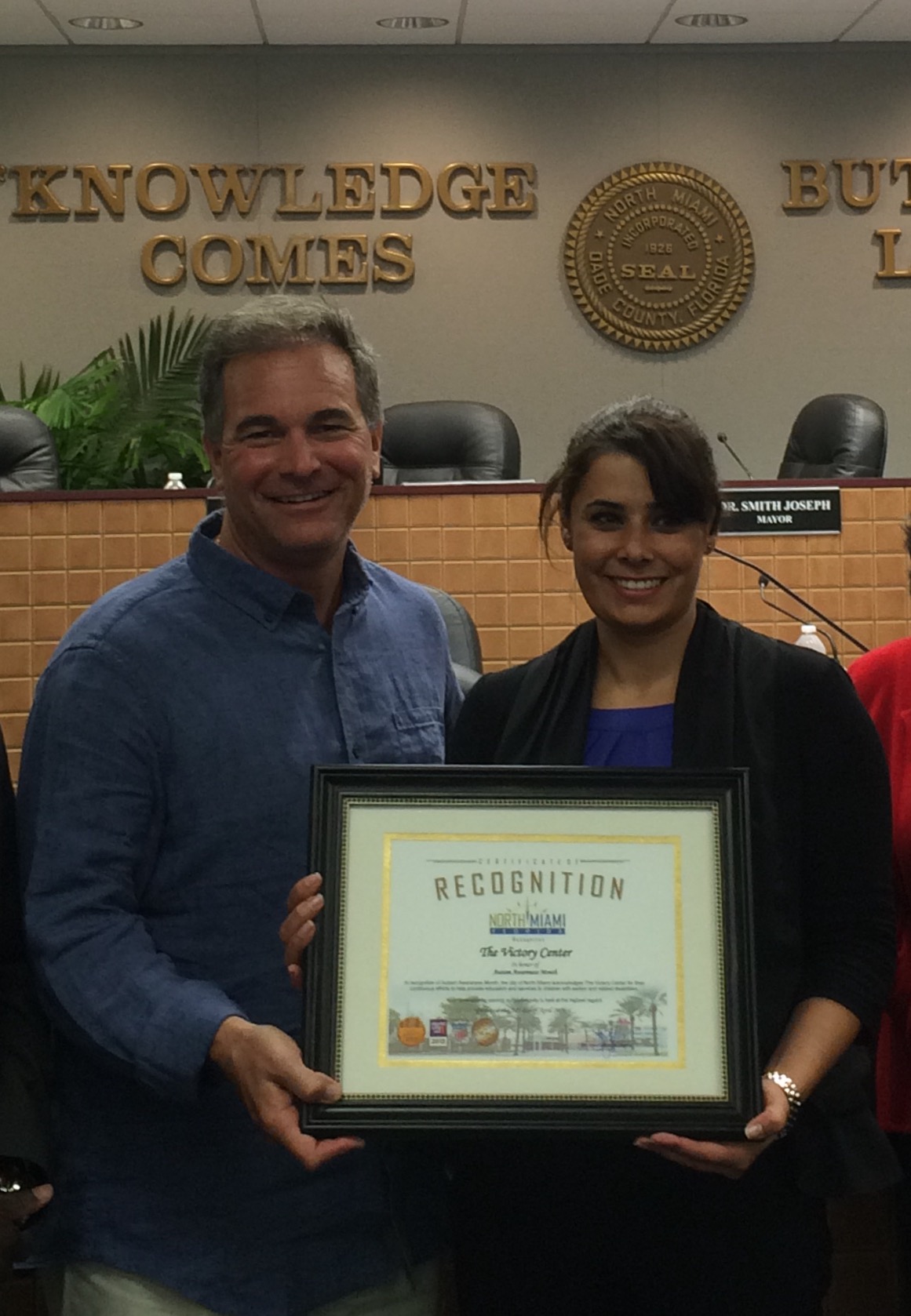 These programs are offered to children challenged by autism and other neurodevelopmental conditions, including language, self-help, social skills, and life skills. The Victory Center also delivers a steady opportunity for children with ASD to experience and learn various levels of social skills that are typically lacking in the more typical home-based therapy programs.

“We are honored to be acknowledged by the City of North Miami for The Victory Center’s continued work in providing excellent education to children with Autism, especially during Autism Awareness month,” said Barnett. “This is what it’s all about.”

Barry Nelson and his wife, Judi Nelson, co-founded The Victory Center in 2000 to help children diagnosed with ASD and similar disabilities. The non-profit organization started in one room within the Michael-Ann Russell Jewish Community Center in North Miami Beach with four children. Currently, it has six classrooms for students ages 3-22, offering three year-round programs with a low student-to-teacher ratio to help children achieve their fullest potential.

During the City of North Miami council meeting, David Barnett was presented with the award by the Major, along with The Victory Center’s Director of Education, Dr. Tara Loughrey.

“With the increasing amount of children diagnosed with Autism, I know The Victory Center is doing all it can to help,” stated Barnett. “I’m confident that, working together, we can continue to improve outcomes for children while providing them with effective educational opportunities.”

In 1995, Mr. Barnett and Mr. Lerner transitioned the firm to only represent employees due to their professional belief that injured workers were not receiving appropriate representation regarding claims against insurance companies and employers. Since then, the focus of the firm has been on the rights of injured workers who possessed expatriate compensation claims, both in the U.S. and internationally. The firm has subsequently litigated hundreds of cases throughout the United States and has filed briefs and appeals in numerous State and Federal jurisdictions. For more information regarding Barnett, Lerner, Karsen & Frankel, P.A., please visit their website at www.injuredoverseas.com or their Facebook page at www.facebook.com/injuredoverseas.

October 25, 2020 myadminsite Law Comments Off on National Association of Bankruptcy Trustees Announces 2020/2021 Board…

“I love NABT and its members, and am deeply committed to making our organization even stronger and healthier in the next year, building on the great success of my predecessor presidents.” ATLANTA (PRWEB) October 24, […]

July 6, 2020 myadminsite Law Comments Off on Greenberg Traurig’s Ernest Greer Recognized as 100 Most…