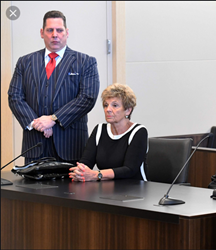 "This woman has been a pillar in the community for more than half a century. She never took a dime. She never would take a dime."

Sharon Simas, a former Chairman of the Board for the now defunct Stockton Boys and Girls Club, was indicted on several felony counts in late 2018. Ref: https://www.recordnet.com/news/20190513/silva-simas-embezzlement-case-moving-in-positive-direction

After more than 10 appearances over 12+ months in the San Joaquin courtroom in front of Judge Charlotte Orcutt, with the final hearing concluding on October 21, 2019, the legal matter against Sharon Simas is over. The case has been dismissed. The Rosenfeld Law Firm represented Ms. Simas and was single-handedly instrumental in the case’s successful outcome. Ms. Simas will walk away free.

Last year, Sharon Simas was indicted on embezzlement, money-laundering, and conflict-of-interest charges in Stockton, California. As Executive Assistant, Sharon Simas was a non-salaried, volunteer member of the nonprofit Stockton Kids Club, whose name had changed in late 2013 from the Stockton Boys and Girls Club. Although the club’s name had changed, the nonprofit remained the same, keeping the same nonprofit ID. The lawsuit emerged as a result of payments, communication, and financial dealings that were under the club’s former name while the club was operating under the new name. The prosecutor argued that Sharon Simas committed theft by false pretenses because of a name change from the Stockton Boys and Girls Club to the Stockton Kids Club.

Lead California Criminal Attorney, Ken Rosenfeld of The Rosenfeld Law Firm in Sacramento, was able to show that Sharon Simas made no misrepresentation about the name of the club and didn’t hesitate to use the Stockton Kids’ Club letterhead for correspondence. He further argued that the evidence presented to the grand jury is insufficient to establish probable cause as to the defendant. Rosenfeld also showed that no funds were spent outside of Stockton and were properly used in compliance with the condition that the money must benefit only people in the State of California. Because the Stockton Kids Club was the same club as the Stockton Boys and Girls Club—except for a name change—hence, there was no intent to defraud.

The case was summarily dismissed on October 21, 2019, all charges were dropped, and Ms. Simas walked away free.

Misdemeanors or felonies, Ken Rosenfeld litigates California criminal defense cases including, but not limited to, the following categories:

(PRWEB) November 20, 2017 Global law firm Greenberg Traurig, LLP continues to strengthen its presence in Denver with the addition of Shareholder Ronald J. Tomassi, Jr. He joins from Bryan Cave. Tomassi is a commercial […]

If It Wasn’t Documented, It Didn’t Happen: Legal &…

March 21, 2018 myadminsite Law Comments Off on If It Wasn’t Documented, It Didn’t Happen: Legal &…

This live webinar will discuss how to handle poor employee performance—including how to fire workers without landing in court. (PRWeb March 21, 2018) Read the full story at http://www.prweb.com/releases/2018/03/prweb15340775.htm