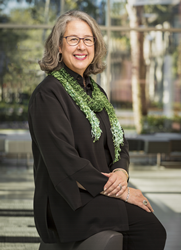 I am proud of what we have accomplished, and I thank the Board for allowing me the opportunity to contribute to Stetson’s upward trajectory through my presidency.

Wendy B. Libby, Ph.D., today announced her decision to retire as president of Stetson University in June 2020 after 11 years in the top leadership role. Libby became Stetson’s ninth president in July 2009 and its first female president since the university was founded in 1883.

“It has been a privilege to be president of an institution as fine as Stetson University,” Libby said in announcing her decision to the Board of Trustees and the university community. “I am proud of what we have accomplished, and I thank the Board for allowing me the opportunity to contribute to Stetson’s upward trajectory through my presidency. My husband, Richard, and I are looking forward to continuing our lives in DeLand and our support of Stetson.”

During her tenure, Libby has led Stetson through significant growth and is currently overseeing its second five-year strategic plan designed to establish Stetson as a university of choice for innovative approaches to tackling complex challenges.

“We have moved Stetson forward on all fronts,” Libby said, “and I congratulate everyone – from our students, faculty and staff to our alumni, friends and the community we serve – on our successes in enhancing the university’s reputation, strengthening our academic rigor and the vibrancy of our campus life, and updating our facilities while maintaining the historic and inviting feel of our beautiful campuses.”

Since Libby’s arrival in 2009, undergraduate enrollment has risen nearly 50 percent to an all-time high of 3,150 students on the DeLand campus and 4,340 across all four of Stetson’s campuses in Fall 2018. In addition, academic programs have been introduced such as the Centurion Sales Program in the School of Business Administration and the Master of Fine Arts of the Americas in creative writing in the College of Arts and Sciences. A robust and focused college-wide program of undergraduate research also was created, as well as the Advocacy Center and Veterans Law Institute in the College of Law.

“On behalf of the Board of Trustees, I want to extend my sincere appreciation to Dr. Libby,” said alumnus Joe Cooper, chair of the Stetson University Board of Trustees. “Dr. Libby has demonstrated unparalleled vision and commitment in establishing Stetson as not only a thriving university known for its academic rigor and excellence but also an institution with a solid financial foundation. Her creative and engaged leadership coupled with her financial savvy have led to stellar fundraising outcomes and unprecedented growth over the past decade that will ensure a vibrant future for Stetson University. We are grateful to Dr. Libby and her husband, Richard, for their dedication and service.”

During Libby’s tenure the university’s endowment more than doubled to $246 million, and the amount dedicated to faculty salaries increased 70 percent with more than 50 new faculty positions added to keep pace with student enrollment. In addition, the Rinker Welcome Center and the newly dedicated Sandra Stetson Aquatic Center were constructed, and the Carlton Union Building (CUB) underwent significant renovation including an increase in size of nearly 50 percent. Plans also are underway to construct a new health and science building following receipt of an $18 million campaign gift in April 2018 from longtime benefactors and Volusia County residents Hyatt and Cici Brown. It is the largest single gift in Stetson’s history.

“It has been an absolute pleasure to have had Dr. Libby at the helm of Stetson University. I count her as a dear friend,” said alumnus Nestor de Armas who was chair of the Board of Trustees when Libby was recruited as president in 2009. “Wendy's insight, her genuine care and concern for others, and her ability to expertly move forward the priorities of a complex organization has left a lasting legacy that will benefit Stetson for decades to come. Wendy’s respect for the history of our 136-year institution, her integrity and commitment to Stetson’s values and her vision for what Stetson could become have reinforced Stetson’s vision of being a deeply Christian, rather than a narrowly sectarian, institution."

Libby ushered in the return of Hatter Football in 2013 after a 57-year hiatus and introduced women’s lacrosse and beach volleyball to Stetson’s roster of NCAA Division I sports. Hatter Baseball made history by earning a spot in the NCAA Super Regionals in 2018, and six players were drafted by Major League Baseball that summer. Today, more than 1,300 undergraduates participate in Stetson’s 17 club sports and intramurals combined. Currently, a golf practice facility is being developed with donor support.

The early announcement allows the Board of Trustees and the university time to conduct a search for Stetson’s next president during the 2019-20 academic year and have a successor in place as Libby departs. Cooper will make more details available regarding a search committee in the coming weeks.

About Stetson University
Founded in 1883, Stetson University is the oldest private university in Central Florida. Stetson focuses on intense learning experiences in a supportive community that allows students to develop their voice in a connected, inclusive environment. Stetson University ranks No. 5 on U.S. News & World Report’s 2019 list of Best Regional Universities (South), and has been recognized as one of The Princeton Review’s 384 Best Colleges, 2019 edition.

Mark Sadaka spoke to attorneys regarding the dangers of Zostavax My cases pending before Judge Bartle are the most advanced in the Zostavax litigation. Englewood, NJ (PRWEB) August 03, 2018 On August 2, 2018 the […]