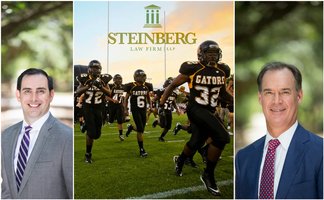 Charleston, SC (Law Firm Newswire) September 12, 2017 - Steinberg Law Firm will be sponsoring the Goose Creek High School Football Team this season. At the next home game on September 15, Attorney Ben Akery will be out on the field during half-time. Akery sponsored the team last year, and provided food for the team prior to each game. Akery is a personal injury attorney at Steinberg Law Firm's Goose Creek office.

The attorneys from the Steinberg Law Firm office will make an appearance at every home game until the end of the season (09/15, 09/29, 10/06, 10/20). We are also recognizing rising stars and athletes with an “Athlete of the Week” recognition program at home games where we will be highlighting athletes for exhibiting sportsmanship, overcoming certain challenges, good grades, etc. Those announcements will be made at half-time, and one female and one male athlete will receive an award plus a gift card at each home game.

Akery says, “We are pleased to support the Goose Creek High School Football Team, recognize the accomplishments of rising stars and athletes, and we hope that the students remain safe while playing each game.”

Connection Between Football and Concussion

Studies have shown that high school students are twice as likely to suffer a concussion as college students while engaged in the game of football. The study, which was sponsored by the NFL and headed by the Institute of Medicine, discovered that in the majority of cases, symptoms of concussions vanished within a couple of weeks, while in others, the symptoms persisted for weeks, months and even years.

According to the study, there are 11.2 concussions for every 10,000 high school practices and games, and just 6.3 concussions among college players. However, since many such injuries are not reported, the authors of the study revealed that the numbers could be higher.

Although the use of a helmet can help diminish the risk of skull fracture, there is little proof that it can shield a football player from suffering traumatic brain injury. Even while wearing a helmet that complies with safety guidelines, football players still have a 95 percent chance of suffering a concussion. A student may suffer a concussion or other severe brain injury due to the negligence of other players, coaches or other parties.

New Guidelines Regarding Information on Concussion in High School

One of our attorneys, Malcolm Crosland, played a significant role in changing the legislation in order to implement Impact Testing in high schools. Crosland is a personal injury attorney at Steinberg Law Firm's Charleston office.

The South Carolina Athletic Trainer’s Association is one of a number of sports medicine community organizations that developed scientific and medical data on which nationally recognized standards and policies concerning concussions in student athletes are based. For instance, every year, before engaging in athletics, each school district must distribute an information sheet on concussions to all coaches, student athletes and their parents. The sheet contains information about the nature and risk of concussions and brain injury, including the risks that are relevant to continuing to play following a concussion or brain injury.

We have such a talented and experienced staff that it just makes sense for us to continue to find new ways to help our clients. SEATTLE and CARTERSVILLE, Ga. (PRWEB) October 26, 2017 As one […]