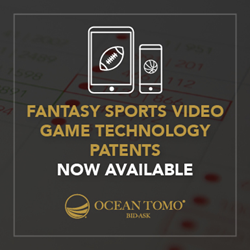 The patents in this auction lot will allow for players to interact with their fantasy sports team while playing a sports video game; something that has not yet been seen in this realm of gaming.

Ocean Tomo Transactions, LLC is facilitating the auction of a portfolio of patents for sports gaming and are part of Lot 50 on the Ocean Tomo Bid-Ask™ Market. These patents deal directly with the incorporation of fantasy sports into sports video games. They would allow for players to interact with their fantasy sports team while playing a sports video game; something that has not yet been seen in this realm of gaming.

The Fantasy Football Market alone was valued by Forbes to be $70 billion in 2013 and socially interactive sports games are among the most popular with gaming in general. Integration of fantasy sports teams into sports gaming is something that has not yet been seen in this market. These patents would allow for video game imagery and platform to perform a fantasy draft, or integrate a fantasy sports team into a video game.

Contact Dean Becker at dean@oti.com or +1 251-262-0000 (UTC-6; Central Time) for further information on the lot available for purchase on the Ocean Tomo Bid-Ask™ Market.

The Ocean Tomo Bid-Ask Market i s an open on-line platform to buy and sell patents. This market is an important step forward, both as a simplified solution for patent transactions as well as a source of information on patent pricing.

The Ocean Tomo Bid-Ask Market uniquely combines the efficiency of an online platform with an experienced team of brokers fluent in both English and Mandarin. The market uses standard transaction documents and is open, transparent and free to view.

Los Angeles, CA (Law Firm Newswire) June 27, 2014 – Inventors can monetize their patented inventions by choosing one of two methods. One option allows an inventor to license the invention – that is, to […]