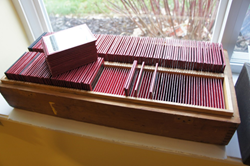 This is a fabulous collection of 163 hand colored magic lantern colored glass slides from the Century of Progress Chicago Worlds Fair.

Scripophily.com®, the Internet’s largest buyer and seller of collectible stock and bond certificates, is offering a rare collection of 163 hand colored magic lantern colored glass slides from the Century of Progress Chicago World's Fair in 1933.

"A Century of Progress International Exposition" was the name of the World's Fair held in Chicago from 1933 to 1934 to celebrate the city's centennial. The theme of the fair was technological innovation. The fair's motto was "Science Finds, Industry Applies, Man Adapts"; its architectural symbol was the Sky Ride, a transporter bridge perpendicular to the shore on which one could ride from one side of the fair to the other.

"A Century of Progress" was organized as an Illinois nonprofit corporation in January 1928 for the purpose of planning and hosting a World's Fair in Chicago in 1934. The site selected was new parkland being created along the Lake Michigan shoreline between 12th and 39th streets in Near South Side, Chicago. Held on 427 acres (1.73 km2) portion of Burnham Park, the "Century of Progress" opened on May 27, 1933. The fair opened when the lights were automatically activated when light from the rays of the star Arcturus was detected. The star was chosen as its light had started its journey at about the time of the previous Chicago world's fair—the "World's Columbian Exposition"—in 1893. The rays were focused on photoelectric cells in a series of astronomical observatories and then transformed into electrical energy which was transmitted to Chicago.

The fair buildings were multi-colored, to create a "Rainbow City" as opposed to the "White City" of the World's Columbian Exposition. The buildings generally followed Moderne architecture in contrast to the neoclassical themes used at the 1893 fair. One famous feature of the fair were the performances of fan dancer Sally Rand. Other popular exhibits were the various auto manufacturers, the Midway (filled with nightclubs such as the Old Morocco, where future stars Judy Garland, The Cook Family Singers, and The Andrews Sisters performed), and a recreation of important scenes from Chicago's history.

Scripophily (scrip-ah-fil-ly) is the name of the hobby of collecting old stock and bond certificates. Certificate values range from a few dollars to more than $500,000 for the most unique and rare items. Tens of thousands of Scripophily buyers worldwide include casual collectors, corporate archives, business executives, museums and serious collectors. Due to the computer age, more and more stock and bonds are issued electronically which means fewer paper certificates are being issued. As a result, demand for paper certificates is increasing while supply is decreasing. “Stock certificates make great gifts and collectibles especially when they are historically relevant,” said Bob Kerstein, Founder of Scripophily.com.

Scripophily.com has items on loan for display in museums around the world. We are also a co-founder of the Sharing Stocks Program, which is a program dedicated to educating and sharing stock and bond certificates with students.

Our company has been featured on CNBC, USA Today, Associated Press, Reuters, Nightline, Today Show, Baltimore Sun, and Washington Post and in many other media publications. The company also offers the World’s #1 old stock research service at OldCompany.com and offers high resolution scans for publications. Scripophily.com has over 16,500 selections on its website.

Scripophily.com /Old Company Research Service, founding member of the Old Stock Exchange, is the successor company to all material published by the Marvyn Scudders Manuals, the Robert D. Fisher Manuals, R.M. Smythe Stock Research Service, and the Herzog & Co., Inc. obsolete research services. These services have been performed continuously for over 137 years since 1880. We are the leading provider of authentic stock certificates, autographs, and old company stock research services.

Financial Poise This webinar presents basic practice pointers to avoid committing malpractice and disciplinary actions, and how to respond to claims of malpractice or unethical behavior. CHICAGO (PRWEB) November 13, 2017 Corporate scandals make the […]