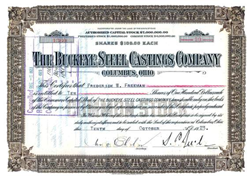 Samuel P. Bush ( Samuel Prescott Bush b. 1863. d. 1948) was the President of the Buckeye Steel Castings Co. in Columbus, Ohio, makers of railcar parts from 1907 - 1927. His entire career had been in the railroad business-- supplying equipment to the Wall Street-owned railroad systems. Samuel Prescott Bush, was a close adviser to President Hoover. Samuel P. Bush was also the first president of the National Association of Manufacturers.

Samuel Prescott Bush was a member of the Stevens Institute of Technology class of 1884. Bush was on the varsity football and baseball teams, and belonged to the tennis club and served a term as a director of the Stevens Athletic Association, all while earning his bachelor's degree. In the early 1890s, Bush assisted Ohio State football coach Jack Ryder and helped organize an amateur baseball league in Columbus - - he played second base on the Pennsylvania Railroad Columbus Shop team. In 1892 he and two others organized one of Columbus's first tennis clubs. Later, as a charter member of the Scioto Country Club in that city, he chaired the club's golf- course construction committee. Bush, who died in 1948, was a noted industrialist -- railroads and steel were his businesses -- who also performed extensive civic and community service. Stevens recognized that service in 1947 by awarding him an honorary - degree of doctor of engineering.

The company also offers the World’s #1 old stock research service at OldCompany.com and offers high resolution scans for publications. Scripophily.com has over 16,500 selections on its website.

Scripophily.com /Old Company Research Service, founding member of the Old Stock Exchange, is the successor company to all material published by the Marvyn Scudders Manuals, the Robert D. Fisher Manuals,R.M. Smythe Stock Research Service, and the Herzog & Co., Inc. obsolete research services. These services have been performed continuously for over 137 years since 1880. We are the leading provider of authentic stock certificates, autographs, and old company stock research services.

For the 4th Consecutive Year, Greenberg Traurig Participates in…

March 10, 2018 myadminsite Law Firms Comments Off on For the 4th Consecutive Year, Greenberg Traurig Participates in…

Standards like those created and championed by SALI will make platforms like NetDocuments more efficient and more useful for our customer base.Peter Buck, NetDocuments, VP of Product Strategy CHICAGO and SALT LAKE CITY (PRWEB) October […]

For more than 30 years, these programs have provided numerous benefits and services to enable millions of Americans to live longer and healthier lives. WASHINGTON (PRWEB) July 30, 2018 When President Lyndon B. Johnson signed […]