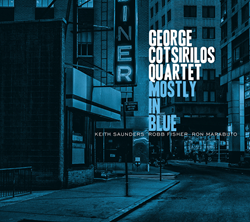 "Mostly in Blue," the new CD by the George Cotsirilos Quartet.

I started hearing a little different sound connected to the tunes I was writing. It seemed more amenable to a quartet, with a little more harmony underlying the melody line.

Jazz guitarist/composer George Cotsirilos had previously recorded mostly in a trio setting with longtime associates Robb Fisher on bass and Ron Marabuto on drums. For his forthcoming sixth CD, "Mostly in Blue," he expanded to a quartet, with pianist Keith Saunders, to shake up his approach a bit but also in the interests of being true to the music he was hearing in his head. OA2 Records will release the new CD on January 19.

“I started hearing a little different sound connected to the tunes I was writing,” Cotsirilos says. “It seemed more amenable to a quartet, with a little more harmony underlying the melody line.”

The trio tested out its chemistry with Saunders, a mainstay of the New York jazz scene with whom the guitarist had never played but both Fisher and Marabuto had. “When we first got together, it wasn’t hard to tell it was working,” he says. “We kind of jelled immediately. In the studio, even before we started playing tunes, when we were playing to get the sound, the chemistry was there. It’s stunning how quickly Keith was there, on top of everything.” Every track on the album was recorded in one or two takes.

In addition to six Cotsirilos originals, the repertoire includes a luminous arrangement of the Harry Warren–Mack Gordon classic “I Wish I Knew,” where Saunders’s presence liberates the stylistically wide-ranging guitarist to play legato more than he usually does. Another highlight is a feverishly fast performance of the Charlie Parker classic “Crazeology.”

The band worked as their own producers in collaboration with engineer Dave Luke, a decorated veteran of Fantasy Records with whom Cotsirilos had worked several times. “We wanted the album to have a live feel,” says Cotsirilos, and this live-in-studio sound can be heard as much in the playing as in the engineering, whether on Bird’s bebop burner or the guitarist’s slinky “Ms. Luna,” written for his “troublemaking” cat.

“Blue Dusk,” another Cotsirilos original, is a darkly shimmying tune with a swaying movement that puts the listener in the best kind of mood to greet the evening. And then there’s “Down, Not Out,” which in speaking to and for the underdog in these agonizing times suggests a cure for the melancholy many people are feeling today.

George Cotsirilos was born in Chicago in 1951. Under the influence of his aunt, a classical music devotee, he chose violin as his first instrument. His involvement in jazz was elevated when an uncle who’d played drums with the Woody Herman Orchestra took him to hear Louis Armstrong. Seeing Oscar Peterson and Erroll Garner play at Chicago’s venerated London House turned him on to the piano. But during his teen years, with local notables including the Butterfield Blues Band and Michael Bloomfield making a national noise, he became strongly involved in blues guitar.

In 1969, Cotsirilos enrolled at UC Berkeley as a sociology major. He taught himself blues riffs, using his background in piano to improve technique. A turning point for him came when he commenced music studies with Warren Nunes, a phenomenal jazz guitarist and prolific writer of guitar books.

Nunes shifted Cotsirilos’s attention to jazz and had him listen not just to great guitarists such as Wes Montgomery and Joe Pass but also luminaries on other instruments, among them John Coltrane, Sonny Rollins, and Bill Evans. Cotsirilos studied classical guitar privately as well through the San Francisco Conservatory of Music.

Music wasn’t the only thing vying for Cotsirilos’s future. Born into a family of lawyers—his late father, George, Sr., the son of Greek immigrants, was a prominent Chicago defense attorney—Cotsirilos acquired a law degree with thoughts of getting involved in social causes. He became an assistant public defender, then moved on to a successful criminal defense practice in San Francisco and a faculty position at the University of California at Berkeley School of Law, where he taught criminal trial practice for fifteen years. At the same time, Cotsirilos continued to practice, perform, and record jazz, releasing co-led quartet and quintet albums featuring venerated drummer Eddie Marshall, and, in 2003, his first solo album, "Silenciosa." He subsequently released three trio recordings with Fisher and Marabuto.

While he finally retired in recent years from practicing and teaching law, he has remained deeply involved in music. “I have done what I have for a number of reasons, both personal and socio-philosophical,” he reflects. “Involvement in criminal law, while still trying to maintain and grow as a musician, was a life experience that was intense, often very rewarding, but also frenetic. Music, which was always there as a salvation, really, remains and now gets my full attention.”

“This year’s survey includes ground-breaking diversity metrics, to tangibly advance one of the profession’s most critical issues. Cost pressures, staff and organizational stresses, and mounting regulations can also be addressed using actionable peer data, in […]

February 5, 2021 myadminsite Law Comments Off on Ban-the-Box Laws Continue to Evolve & Continue to Cause Confusion…