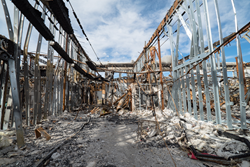 Last month, Richardson “Red” Griswold of Griswold Law completed the initial inspection of the Banning Business Center, which has become a severe health and safety problem in the city of Banning, California. Griswold was appointed as receiver by the Riverside County Superior Court in late November 2017.

During the initial inspection, Griswold worked with local officials, a security firm and his contractor to clear the property of any trespassers and assessed the current conditions of the abandoned property, which is approximately nine acres. The property has been a major health and safety hazard for the City of Banning. According to the City, there have been over 25 fires in the last seven and a half years.

The Banning Business Center project was abandoned in 2010 when the owners ran out of money to complete construction. Since that time, transients have been largely responsible for the fires and dilapidated state of the multiple buildings within the park. Firefighters responded to a fire at the location as recently as November 18, 2017, when lanes of Interstate 10 had to be shut down due to the blaze.

To combat further damage and secure the premises, Griswold contracted with a security firm to patrol the property 24-hours a day. That team is in direct contact with local police should any issues arise.

A contractor was also present during the initial inspection to identify further safety issues and to shore up the securing of the perimeter. Griswold is authorized by the court to secure funding for the receivership project that will be repaid via the eventual sale of the property. The goal of all parties involved is to eliminate the health and safety risks at the property and make this property a thriving contributor to the local economy once the development project is completed by a new buyer.

“My number one priority at this time is to secure this property and prohibit any further trespassing,” Griswold says. “This will ensure there are no more fires, which has been an ongoing and severe risk to the community for years. My next step will be to sell this property to a qualified buyer that will be obligated—under my and the court’s supervision—to develop this property and make it a code-compliant, safe and contributing source for the City of Banning.”

Richardson “Red” Griswold of Griswold Law in Solana Beach, California has been appointed as a receiver over 60 times across California. He has extensive experience as a court-appointed officer over various types of substandard residential and commercial properties. To learn more about the receivership remedy or other notable projects, please visit GriswoldLawSanDiego.com.

Sabal Trail v. Thomas, Defendants’ Trial Team The landowners are appreciative of the federal courts being open for redress of common citizens and conducting jury trials as a means to protect the constitutional private property […]

May 10, 2018 myadminsite Law Real Estate Law Comments Off on The Weaver Team Real Estate Moves to Seattle Area and Joins…

Lori Weaver Real Estate Agent I’m so thrilled to be sharing my love and knowledge of this area with our real estate clients! BELLEVUE, Wash. (PRWEB) May 10, 2018 The Weaver Team recently moved its […]

Searching for the Will Quick overview of California probate administration HUNTINGTON BEACH, Calif (PRWEB) July 19, 2018 This overview is provided by Mark W. Bidwell. In California, the set of laws referred to as the […]