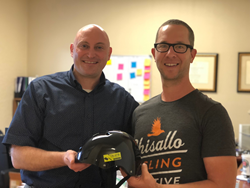 “It’s our hope that these helmets will reduce or eliminate the risk of head injuries in children on a bicycle.”

Personal injury attorney, Andrew Traub, is trying to prevent injuries to children by donating fifty bike helmets to Ghisello’s Bike Initiative. “Brain injuries are a game changer – they can be permanent, require surgery and rehabilitation, and can wreck a person’s life or cause death,” said Mr. Traub.

Every helmet can keep a child safe from a head injury. “It’s our hope that these helmets will reduce or eliminate the risk of head injuries in children on a bicycle,” said Andrew.
According to the American Association of Neurological Surgeons, Cycling was the top sport for head injuries for kids under ages 14 and under.

Currently, Texas does not have a statewide helmet law. As a general matter, it is legal for all persons of any age to operate a bicycle without wearing a helmet unless otherwise provided by a municipal regulation. However, cities such as Austin, Houston, and Ft. Worth have passed mandatory helmet laws for children under 18.

According to the U.S. Department of Transportation, based on 2015 data released in June 2017 and still the most recent data:

The Traub Law office partnered with Central Texas Myofascial Release and Cynergy Data Texas to purchase the helmets. Donations toward the purchase of more helmets can be made at AustinAccidentLawyer.com/hemlet-donations.
Let’s keep kids safe!!!

May 2, 2017 myadminsite Immigration Law Comments Off on Teen Dies After Ingesting Liquid Meth