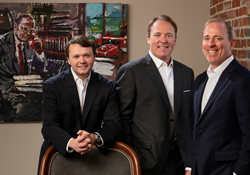 Three attorneys at personal injury firm Hasty Pope LLP, have been named among the 2019 Super Lawyers. Super Lawyers is a research-driven, peer influenced rating service of outstanding lawyers who have attained a high degree of peer recognition and professional achievement. Honorees include:

“It is an honor to have three of our attorneys named as 2019 Super Lawyers,” Jonathan Pope said. “Super Lawyers is a unique and validating honor because it is based on peer reviews in addition to professional performance. I couldn’t be prouder that our team has been recognized for its hard work in securing the compensation our clients deserve.”

Super Lawyers is a research-driven, peer influenced rating service of outstanding lawyers who have attained a high degree of peer recognition and professional achievement. The patented selection process includes independent research, peer nominations and peer evaluations. Each candidate is evaluated on 12 indicators of peer recognition and professional achievement. Selections are made on an annual, state-by-state basis. The objective is to create a credible, comprehensive and diverse listing of outstanding attorneys. While up to 5 percent of the lawyers in a state are named to the Super Lawyers list, no more than 2.5 percent are named to the Rising Stars list. For more information about Super Lawyers and the selection process, visit http://www.superlawyers.com

Identity Theft Resource Center logo “These settlements don’t take into consideration the long term ramifications of every record that is compromised in a breach. The impact may not be truly realized for decades,” said Eva […]

AUSTIN, Texas (PRWEB) March 06, 2021 Between the COVID-19 pandemic and the competitive Austin real estate market, many local businesses could use the support of an experienced commercial real estate attorney. Property management firms have […]