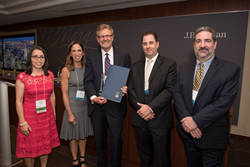 The following individuals and organizations were also honored at the October 12th event.

The ENYA honors organizations and individuals who demonstrate exceptional leadership and innovation in smart energy use and conservation, and whose work has impacted beyond their individual buildings or sites. Assemblywoman Amy Paulin served as Key Note Speaker at the event.

Diana Sweeney, Executive Director, NYECC noted “In this climate of ever more stringent energy codes and regulations in NYC, it isn’t so easy to stand out from the crowd and deliver energy and carbon reductions that are over and above what has now become a norm. However, our honorees have done just that. We are pleased to acknowledge those who have made significant impacts in this area at our annual ENYA event.”

About The New York Energy Consumers Council (NYECC)
The New York Energy Consumers Council represents the interests of major energy users in New York City and Westchester County and strives to ensure that the local utility provide safe and reliable delivery of energy at just and reasonable rates. The NYECC provides collective strength for its members through ongoing interventions in numerous proceedings before the New York State Public Service Commission. The Council also provides advocacy for its members in arenas such as the New York Independent System Operator and the Federal Energy Regulatory Commission.

How to Change Owners of timeshares located in California, Florida,…

November 7, 2019 myadminsite Law Real Estate Law Comments Off on How to Change Owners of timeshares located in California, Florida,…

Deeds for timeshares in California, Florida, Hawaii and Nevada Change a timeshare owner by deed. HUNTINGTON BEACH, Calif. (PRWEB) November 07, 2019 This Tip Sheet by Deed and Record provides a brief overview of ownership […]

Greenberg Traurig’s Steven Fleissig Elected to ACMA Board of…

“I believe that ACMA has a great future ahead of itself and am immensely honored to be elected to the Board of Regents,” said Steven Fleissig. FLORHAM PARK, N.J. (PRWEB) September 23, 2020 Steven Fleissig, […]