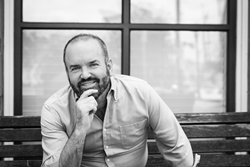 Steve Soutee was a high-flying, skirt chasing Missouri lawyer, who wound up in high-profile cases and spent an extended term in prison. He was an Ozarks legend for years, and Dale Wiley found that he would make a perfect fictional character.

Steve Soutee was a high-flying, skirt chasing Missouri lawyer, who wound up in high-profile cases and spent an extended term in prison. He was an Ozarks legend for years, and Dale Wiley found that he would make a perfect fictional character. Now that decision: to make a real person into fiction is the subject of a new podcast entitled Soutee and debuting on Friday, October 20, 2017.

For those unfamiliar with podcasts, the new technology allows you to play a radio-like broadcast for free on your phone or computer. In recent years, podcasts have become very popular ways for information to be transmitted, because any smart phone will allow you to stream multiple programs for free, and once you have clicked subscribe, all future content is automatically delivered to the device. More information can be found on podcasts on http://www.soutee.net.

Anyone wishing to broadcast the podcast on radio should contact Wiley about adding their signal to an increasingly large project.

The Soutee podcast came from an idea when Wiley started writing about lawyer Steve Soutee as a fictional character. “I knew Steve pretty much all my life, and the more I thought about just how interesting an individual he was, the more it seemed appropriate to write about a fictionalized Soutee, because the real one was already larger than life.”

Soutee was a trial lawyer, a horse racer, a notorious party host and traveler, but Wiley also indicates that he had many other focuses that added to his mystique. “If you didn’t know Steve well, you would have missed his incredible skills as a gardener and a cook, his devotion to his parents and his voracious appetite as a reader.”

Of course, Soutee also had a less admirable side, pleading guilty to stealing by deceit in cases in 1997 that led him to serve almost five years in prison. Those issues are also discussed in the podcast, along with the constant rumors that Soutee was involved in the 1981 death of his second wife Susan.

“When you realized all of the elements of Soutee, you come to the conclusion that he was as near a walking fiction as you would ever meet,” said Wiley. “From the big words he used and how carefully he chose them to the many stories he left behind. I want to document all of that. I don’t just want to talk about the fun things.”

Wiley invites people to add their story to his growing information. “You are welcome to write me about your memories of Soutee, good, bad or both. Let me know if I can use your name, and be aware that I may call you to read it on the air, if you’d like.” Wiley can be reached at dalewileyauthor(at)gmail(dot)com, or, as he prefers in this case, by sending an email to Dale Wiley at PO Box 390, Crane, MO 65633. “I would love to get cards and letters on this. Part of the story I want to explore is that essentially the world left Steve behind when he went to prison. The days of longhand and lore were gone when he returned to regular life in 2002. I think an old-fashioned concept of cards in the mailbox is perfect for this project.

Wiley doesn’t know the exact length of the series, but a weekly episode will be released on Fridays for the next several months. “The interviews alone are voluminous.” It is amazing all of the material that can be created on one person.

Wiley adds that his first two stories about a quasi fictional Steve Soutee are available on Amazon and other online booksellers such as Barnes and Noble and AplpMae for free as an ebook. More information on that as well can be found at http://www.soutee.net or by simply searching for the author’s name and Soutee. A trailer about the podcast and Soutee is already available on the site.