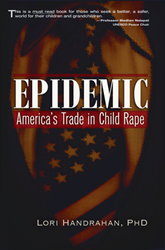 The safety of our children is an issue that all Americans must be concerned with. Sex crimes against children in particular, cyberporn and all the rest is beyond atrocious. -Paul Brandus, White House reporter. West Wing Reports

The problem of child sex abuse and its cover-up is real. A generation of American children are being destroyed. If everyone thinks that this happens to someone else’s children and their children are safe, they are mistaken.

Their children might be enduring sexual abuse right now while they remain dangerously ignorant. America’s appetite for child pornography puts all children at risk. Whether acknowledged or not, this is a very real epidemic.

About the Author:
Dr. Lori Handrahan has over twenty years of humanitarian and human rights work in Central Asia, Africa and the Balkans. Her focus is gender-based violence, conflict/post-conflict environments, UN reform, and ending child sex abuse. Dr. Handrahan completed her Ph.D. at London School of Economics. Her work is published widely from academic journals to The New York Times, Christian Science Monitor, Huffington Post, The Washington Times, Forbes, The National Journal, The Daily Beast, and Fox News. She has been a guest on CNN, Fox News, CTV, and CCTV.

Praises and support for Lori Handrahan's dedicated work in putting this book together:

"I view Dr. Handrahan’s efforts to pull together the data surrounding child pornography and child sexual abuse that was scattered, until this book came out, as a seminal document from which I hope Congressional hearings, corporate action, and greater parental awareness will come. Through the data and information amassed in Epidemic, it is no longer possible to equate child sexual abuse, pornography, and exploitation as the acts of a few raincoat wearing men or sophisticated entertainment, but the most hateful and evil conduct imaginable." —J. Robert Flores, National Law Center for Children and Families, Vice President and Senior Counsel, 1997 - 2001 Office of Juvenile Justice and Delinquency Prevention, United States Department of Justice, Administrator, 2002 - 2009 Coordinating Counsel on Juvenile Justice and Delinquency Prevention, Vice Chairman Congressional Child Online Protection Act Commission , Commissioner, 1998 - 2000 Deputy Chief, Child Exploitation and Obscenity Section, Criminal Division, Senior Trial Counsel, 1989 - 2007

"Finally, someone with the strength and courage to expose the epidemic that is destroying our country. Child sexual abuse, in all its forms, is not and never has been just a family’s dirty little secret. It has been under our collective noses all along and we have ignored the stench. Dr. Lori Handrahan’s thorough research deftly illustrates how money, sex, and the exploitation of our children have fueled a fire that is ravaging our nation, our world. Epidemic: America’s Trade in Child Rape answers questions that no one dares to ask and identifies abusers whom we don’t want to admit exist." —Sgt. Stephen J. Pickering, Maine State Police (retired)

Bohn and Fletecher, LLP San Jose, CA (Law Firm Newswire) March 29, 2018 – On Monday, a motorcyclist who was run down by a drunk driver in Los Gatos last August filed suit against the […]