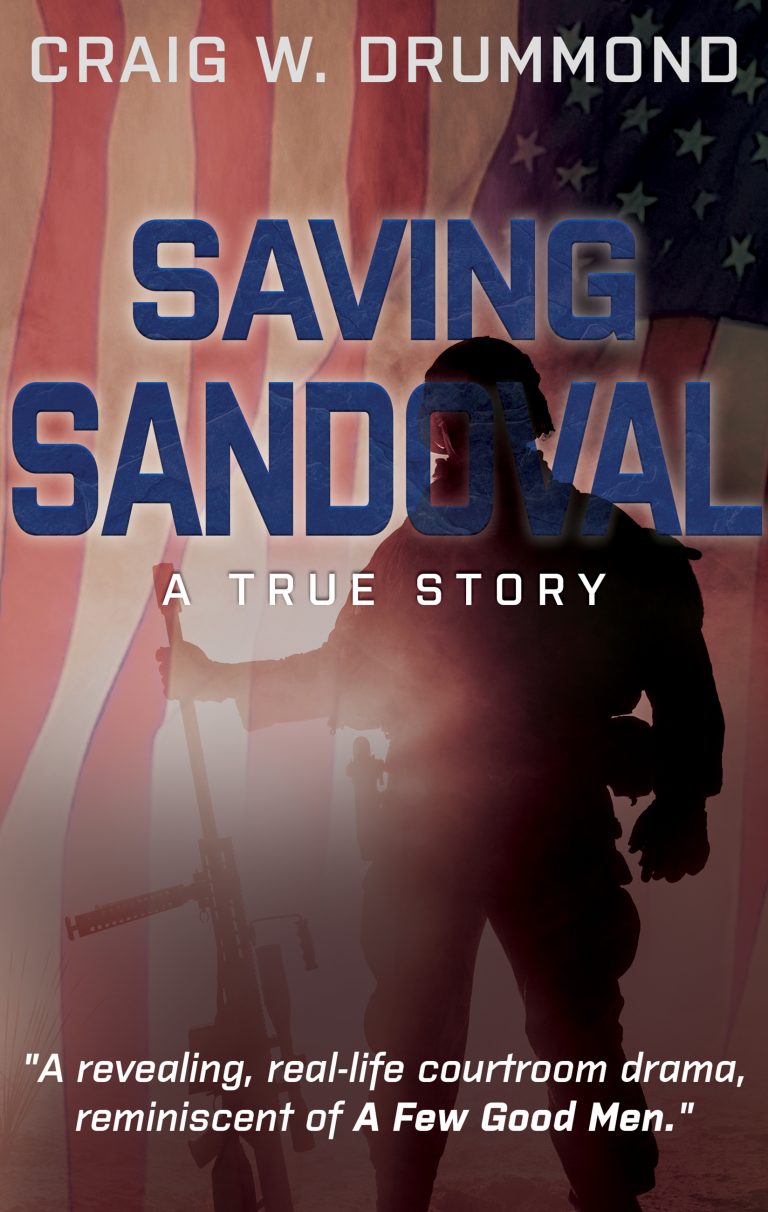 While deployed to the most dangerous area in Iraq known as the “Triangle of Death,” Sandoval, an airborne infantryman and elite sniper, was instructed to “take the shot” and kill an enemy insurgent wearing civilian clothes. Two weeks later, Army Criminal Investigation Command descended upon Sandoval’s unit and began interrogating the soldiers, trying to link Sandoval and others to war crimes, including murder.

Captain Craig W. Drummond was the JAG military defense attorney assigned to Sandoval’s case. “The case blew up and was closely followed by reporters around the world. After all, a soldier is trained to follow orders, not ask questions or second-guess authority. I knew I needed to prove his innocence or risk other soldiers being tried and convicted for simply doing their job.”

Drummond's new book details the entire trial, from Sandoval’s dramatic arrest to testimonies from key witnesses to his ultimate acquittal and retention in the U.S. Army. The trial itself took place in a U.S. military compound on the outskirts of Baghdad during the height of a U.S. military surge of troops into Iraq. The book brings the reader into the reality of modern warfare in a post September 11th environment where the enemy does not always wear a uniform and if an event makes headlines, military leaders are quick to point the blame on the lowest ranking soldiers regardless of the injustice. The fast-paced and detailed account of the investigation and trial testimony from elite Army snipers brings the reader into the courtroom and onto the battlefield of Iraq.

“It’s a story that I’m sure the government would like us all to forget,” said WildBlue Press Owner and New York Times Bestselling Author Steve Jackson. “Craig has done an outstanding job, both as an attorney fighting for a young soldier’s freedom, and documenting what happened.”

"Armed forces continue to operate in uncertain and complex environments and this story is an insightful and powerful look into the challenges and judgments faced by a young sniper deployed to the battlefield of Iraq,” Brigadier General Jeffery L. Underhill, U.S. Army Retired, (Iraq Veteran).

“This book is a strong caution for all military commanders who would consider judging the warriors who run toward the sound of gunfire. Front-line actions should be judged from a front-line perspective, not for how those actions may play in the news." Dave Earp, former U.S. Navy SEAL Officer, USNA ‘97, BUDS Class #230, (Iraq and Afghanistan Veteran).

“Saving Sandoval gives an inside look at the scrutiny soldiers face on the battlefield and the politics involved in modern day warfare.” Major Chris Ophardt, U.S. Army, Public Affairs Officer to the Secretary of the Army, 2016-2017, (Iraq Veteran).

Saving Sandoval: A True Story by Craig W. Drummond released from WildBlue Press on July 26, 2017. To arrange an interview with the author or receive a review copy of the book, please contact WildBlue Press at [email protected]

Craig W. Drummond received his undergraduate and law degree from Drake University and served as a Captain and attorney in the U.S. Army JAG Corps. While deployed to Iraq, he led the defense team for Specialist Jorge G. Sandoval Jr. The case received major media coverage from The New York Times, The Washington Post, and the international press. He was awarded the Bronze Star for his service in a combat zone. Now an attorney in private practice at the Drummond Law Firm in Las Vegas, this is his first book.

More Information on Craig W. Drummond can be found here:

WildBlue Press is the premier independent publisher of True Crime, Thrillers, and Suspense

You can read more about the book here

Note: Review copies of this book are available by emailing [email protected]

Interviews can also be arranged with the author. Please include your mailing address and note the web address where you post your reviews/interviews. Thank you.

HotDocs User Group Tom Miller has an impressive understanding of risk, analytics, and technology and his keynote presentation about mitigating employee risk will be valuable to any organization – regardless of industry. Lindon, Utah (PRWEB) […]