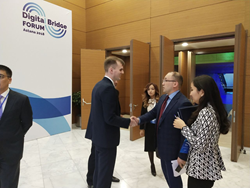 The MILE blockchain, as an unowned and fully decentralized solution, is clearly the best tool to manage [Astana's rapid development] without any conflicts of interest.

The Mile Unity Foundation and government of Kazakhstan have formally agreed to use the MILE Blockchain as a method for the transparent allocation of foreign capital investments for the development of significant infrastructure projects in the national capital of Astana.

Under the agreement, Mile Unity Foundation will advise local officials and the Office for Investment and Entrepreneurship Development of Astana in the practical application of blockchain technologies for managing investment capital throughout the development process.

The memorandum of understanding and partnership was signed by George Goognin, a Mile Unity Foundation Global Ambassador. Alisher Abdykadyrov, Head of Astana’s Office for Investment and Entrepreneurship Development, is the signatory representing the Astana government. Third party to the signing of the memorandum was Bolat Smagulov, a Mile Unity Silk Road Ambassador.

“The signing of this agreement is another step toward demonstrating the great progress the MILE blockchain represents in terms of cross-border transactions, investments and money remittance,” said Goognin. “We are pleased to be advising Kazakhstan’s officials and businesses in the implementation of blockchain that will ultimately improve the nation’s access to foreign capital.”

“Astana is undergoing rapid economic development, particularly in the area of IT startups,” said Abdykadyrov. “The pace of these developments necessitates a high-tech solution that ensures investors’ money is spent wisely and appropriately. The MILE blockchain, as an unowned and fully decentralized solution, is clearly the best tool to manage this task without any conflicts of interest.”

About the MILE blockchain

The MILE blockchain combines the functions of two cryptocurrencies, MILE and XDR, to create a stable international foundation for cross-border payments, trade settlements, investments and remittance. XDR is tied to the value of the historically stable IMF special drawing rights, while MILE serves as an index of XDRs demand. The MILE blockchain empowers users to act as "emission centers," which can mint and use new XDR as the ecosystem grows. It also serves as a fully decentralized and unowned system by which developing economies and those suffering under sanctions and embargoes can meaningfully participate in the integrated global economy of the 21st century.

The MILE ecosystem was designed by Lotus Mile, the name used by the unknown person or people who developed MILE blockchain.

The negotiations about the MILE blockchain real world applications have been started with many governmental and commercial organizations in Japan, China, South Korea, Turkey, Brazil, Russia, Kazakhstan, Namibia, Uganda and others. Currently, partnership agreements for using the MILE ecosystem exist with several organizations, including BRICS, G-Global and the Silk Road Association.

About the Mile Unity Foundation

The Mile Unity Foundation is a non-profit organization that evangelizes that adoption of the MILE blockchain. Its focus is growing the ecosystem to support a more inclusive global economy that connects the currently marginalized 4 billion people of the world who cannot access simple banking and financial services. The Mile Unity Foundation is made up of global ambassadors located on every continent who are currently engaged in diplomatic missions to bring awareness and implementation support to governments and business leaders worldwide.

Advocates From 50 States to Participate in Federal Advocacy Day Hosted…

May 19, 2020 myadminsite Law Comments Off on Advocates From 50 States to Participate in Federal Advocacy Day Hosted…

MCLEAN, Va. (PRWEB) May 19, 2020 RESOLVE: The National Infertility Association and ASRM (the American Society for Reproductive Medicine) are partnering to host their annual Federal Advocacy Day as a virtual event on Wednesday, May […]

May 10, 2018 myadminsite Law Comments Off on James Scott Farrin Donates to Community Organizations Across NC

“We had an entire truckload full of items. All the lawyers in our office and paralegals and others got together and packed that truck full. There were monetary donations, too. It was truly a team […]

“With ACATech’s PA tool, we have consistently been able to significantly reduce those penalties, many times eliminating them entirely.” -Kim Phillips, VP of Client Services NATICK, Mass. (PRWEB) December 31, 2018 The IRS has issued […]