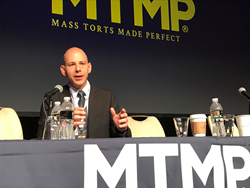 I look forward to working with our talented team of attorneys on the Zostavax litigation until justice is done.

Mark T. Sadaka was appointed by Judge Harvey Bartle of the Eastern District of Pennsylvania as co-lead counsel of the Zostavax Multi District Litigation (MDL). As co-lead counsel, Mr. Sadaka will help lead a team of attorneys who are highly skilled at litigating these complex cases.

The Zostavax Multi-District Litigation (MDL) will ultimately consist of thousands of lawsuits alleging that Merck’s Zostavax vaccine resulted in significant injuries for thousands of people including blindness, stroke, and heart attacks. Merck requested that all the cases be heard in front of one court for pre-trial proceedings due to the large number of injury cases.

Mr. Sadaka has also spoken on the Zostavax litigation to other counsel at numerous conferences around the county. He co-petitioned for the creation of a Zostavax litigation group for the American Association of Justice. He was appointed co-chair of that group, which has the sole purpose of fostering cooperation amongst plaintiffs’ counsel.

Zostavax is a live virus vaccine made by pharmaceutical giant Merck, and approved by the U.S. Food and Drug Administration in 2006. It was the only approved shingles vaccine in the United States until late 2017, which allowed the company to earn a reported $749 million in sales.

Zostavax is designed to reduce the risk of getting herpes zoster — a painful and debilitating condition commonly known as “shingles” — in individuals ages 50 years and older, who are at increased risk of developing the virus. The vaccine is typically recommended for people aged 60 years and older by the U.S. Centers for Disease Control and Prevention, and doctors commonly give the vaccine in a one-dose shot. Zostavax contains a live, but weakened form of the herpes zoster virus.

Mark T. Sadaka is the principal of Sadaka Associates, LLC, in Englewood, New Jersey with offices in New York and Maryland. He is an accomplished trial lawyer with a specialized medical background that has made him leader and invaluable resource in the realm of medically complicated cases. Mr. Sadaka represents people hurt by defective drugs, medical devices, vaccines, exposure to hazardous chemicals, and other dangerous products. He also represents victims of corporate fraud.

Hummingbird Selected as Member of the American Fintech Council

May 25, 2021 myadminsite Law Comments Off on Hummingbird Selected as Member of the American Fintech Council

The financial services industry is increasingly a technology business. Hummingbird is excited to help spearhead efforts to ensure that the sector continues to grow safely and delivers on its promise of better access, better capabilities, […]