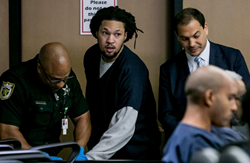 This was a very difficult decision for all involved, given the fact (Jenkins) maintained his innocence since he was originally detained on the homicide charge,” Skier said.

Defense Attorney, Scott Skier, of The Skier Law Firm, P.A., obtained an eye-popping resolution for his client, Curtis Jenkins. The court of record for this case is the State of Florida Circuit Court, 15th Judicial Circuit - West PalmBeach, FL. The case number is 50-2017-CF-007825-AXXX-MB.

Mr. Jenkins was charged with First Degree Murder with a Firearm but pled to the far lesser included offense of Aggravated Battery with a Deadly Weapon before Palm Beach County Circuit Judge Jeffrey Gillen on August 6, 2019. Judge Gillen imposed the negotiated settlement of four (4) years in the Department of Corrections. At the time of his sentencing, Jenkins had earned 731 days of jail credit. This resolution assures that Mr. Jenkins will be released in less than two (2) years.

According to official court documents, Assistant State Attorney Chrichet Mixon stated that there was a disturbance inside a residence on the 4600 block of Myla Lane, west of N. Military Trail and South of Okeechobee Boulevard, in unincorporated Palm Beach County, on July 23, 2017. John Roland was found dead in close proximity to that residence which was the home of his former girlfriend. The State of Florida alleged Curtis Jenkins, the former girlfriend’s nephew, was responsible for Mr. Roland’s death.

Attorney Skier said that he, Jenkins and his family are “ecstatic” about the resolution. “This was a very difficult decision for all involved, given the fact (Jenkins) maintained his innocence since he was originally detained on the homicide charge,” Skier said.

Attorney Scott Skier and his West Palm Beach firm, The Skier Law Firm, have been successfully defending major crime cases such as Jenkins’ for almost 20 years in Florida’s State and Federal Courts.

Motorsport Park Hastings In this auction, like in the racing life, don’t finish second. HASTINGS, Neb. (PRWEB) September 17, 2019 Have you ever dreamed of owning a racetrack or waving the checkered flag? On October […]

Flint Michigan’s Finest Reunited in Denver, Colorado To Run For a Cause

October 18, 2017 myadminsite Law Comments Off on Flint Michigan’s Finest Reunited in Denver, Colorado To Run For a Cause

Team Boxelder at the Finish Line of the Denver Rock ‘n Roll Marathon The people of Flint need to rally together more than we ever have before. -Audra Walter, ’87 Genesee County Baby of the […]