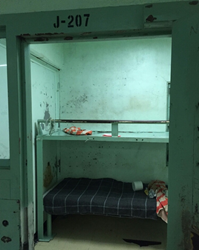 Dunham was a pre-trial detainee who was suffering from severe alcohol withdrawal when he was allegedly beaten and tased by sheriff deputies.

On May 29, 2019, an Amended Complaint was filed in a civil rights lawsuit against Monterey County Sheriff deputies and the County of Monterey by a former prisoner. The case is entitled John Dunham v. County of Monterey, Et Al. (Case # 3:18-cv-04467) and is before Judge Elizabeth Laporte in the United States District Court for the Northern District of California, San Francisco Division. Dunham is represented by attorney Charles Tony Piccuta from the Piccuta Law Group, LLP.

The Amended Complaint alleges that Dunham was a pre-trial detainee who was suffering from severe alcohol withdrawal when he was severely beaten and tased by sheriff deputies. Specifically, that Dunham was suffering from delirium tremens-a life threatening medical emergency. The Amended Complaint claims that Monterey County Jail did not follow its own procedures and guidelines for screening Dunham for alcohol withdrawal and potential alcohol withdrawal. Instead, it states that this task was undertaken by deputies who were not adequately trained to do it, instead of qualified medical personnel as required.

The Amended Complaint further states that all employees of the Jail and deputies ignored the obvious signs of Dunham's medical condition. It is alleged that Dunham was hallucinating, incoherent and disoriented to time and place when deputies decided to take action against him for repeatedly demanding a cup for water. The Amended Complaint continues to state that four deputies were involved in beating Dunham and that he was tased while on the ground of his jail cell bleeding.

According to the allegations, Dunham sustained facial fractures, a head injury, a concussion, multiple lacerations to his face and scalp requiring staples and stitches and broken teeth. It is further alleged that Dunham was transferred to an outside emergency department where he was immediately diagnosed with delirium tremens and treated. It is also alleged that his medical condition was so severe that he was admitted to the intensive care unit.

Attorney Big Al, Alon Barzakay, Working a Case We see a lot of road rage incidents this time of year, and we’ve found that it is a difficult behavior to predict. However, defensive driving and […]

COVINGTON, La. (PRWEB) May 19, 2020 Barkemeyer Law Firm is pleased to announce their team is now providing statewide DWI defense representation to clients across the state of Louisiana. For over 15 years, the firm […]