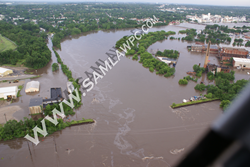 June 16, 2008 photo of Union Pacific’s and Alliant Energy/CRANDIC’s rail bridge near Cargill in the foreground near the bottom of the photo as the water is receding; note green vegetation growing on r

“We look forward to seeking review of the decision by the United States Supreme Court so that our clients can hopefully get their day in court where we can present evidence, the truth, and scientific facts to prove what caused the 2008 Flood in Cedar Rapids."

The railroads claim that federal law preempts the property owners’ right to sue under state law, and since there is no remedy under federal law, the railroads argue they are immune from being sued.

Lawyers representing the property owners, however, argue that when Congress enacted the Interstate Commerce Commission Termination (ICCTA), which deals with transportation issues like rates and disagreements over damaged goods in transit, they did not intend to immunize railroads from garden variety suits for property damage like the present one.

A copy of the original lawsuit filings and scientific facts proving the property owners’ claims can be found here and here.

According to an August 2007 GAO report on Railroad Bridges and Tunnels – Federal Rule in Providing Safety Oversight and Freight Infrastructure Investment Could Be Better Targeted, there are over 76,000 railroad bridges in this country, most of which are over 100 years old and the federal regulators at the Federal Railroad Administration have only limited resources for inspecting the bridges and ensuring their safety. The Property Owners submit that a ruling that states should have no role at all in ensuring the safety of the bridges within their borders would be poor public policy.

In appealing to the United States Supreme Court, attorneys for the property owners noted: “We respectfully disagree with the Iowa Supreme Court’s ruling and look forward to seeking review of the decision by the United States Supreme Court so that our clients can hopefully get their day in court where we can present evidence, the truth, and scientific facts to prove what caused the 2008 Flood in Cedar Rapids while exposing the great lengths others took to hide the truth from the public.”

DOYLESTOWN, Pa. (PRWEB) September 18, 2018 Furia Rubel Communications, Inc. CEO, Gina Rubel, says it’s “not if but when a crisis will strike a law firm.” She, along with a panel of in-house law firm […]

Attorney Bradley C. Giglio “We are thrilled to name Brad as a Partner at our firm. He understands the intricacies of the law and treats every client with the utmost integrity and respect while protecting […]