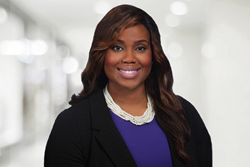 Kimberly has repeatedly proven herself not only as a great lawyer, but also as a natural leader. From her time spent in the Leadership Class of the State Bar to her work as the At-Large Director of TYLA, she’s demonstrated her commitment to bettering the Texas legal community.

Kimberly Clark of Kane Russell Coleman Logan has been elected a Fellow of the Texas Bar Foundation, a mark of distinction and recognition of her contributions to the legal profession.

Each year, one-third of one percent of State Bar members are invited to become Fellows. Once nominated, a Fellow must then be elected by the Texas Bar Foundation Board of Trustees. According to the Foundation, Fellows are selected for “their outstanding professional achievements and their demonstrated commitment to the improvement of the justice system throughout the state of Texas.”

Kimberly, an associate in the firm’s Houston office, represents clients in legal disputes involving catastrophic personal injuries, premises liability, and products liability. She has extensive and diverse experience in the courtroom, having previously served as a member of the Civil Division of the Special Prosecution Unit in Huntsville, Texas and as an Assistant District Attorney in Anderson County. Kimberly earned an LL.M. and Juris Doctor from The University of Arkansas School of Law and a Bachelor of Arts from The University of Texas at Austin.

Kimberly is active in numerous local legal organizations and has held leadership roles in the State Bar of Texas Class of 2013 – 2014 and the Texas Young Lawyers Association. Most recently, she was chosen for the Southwest Region’s 2017-2018 Glass Leadership Institute (GLI) class, a nationally recognized leadership development program designed to give a select group of young professionals an introduction to programs, policies and expertise of the Anti-Defamation League. The goal of GLI is to provide broad exposure to the ADL’s programs and resources and to create a cadre of young professionals who will take on regional and national leadership positions within the League.

“Kimberly has repeatedly proven herself not only as a great lawyer, but also as a natural leader. From her time spent in the Leadership Class of the State Bar to her work as the At-Large Director of TYLA, she’s demonstrated her commitment to bettering the Texas legal community,” said Marcy Rothman, managing director of the firm’s Houston office.

Kane Russell Coleman Logan is a full-service law firm with offices in Dallas and Houston. Formed in 1992 with five lawyers, today KRCL employs more than 80 attorneys. The Firm provides professional services for clients ranging from Fortune 500 companies to medium-sized public and private companies to entrepreneurs. KRCL handles transactional, litigation and bankruptcy matters in Texas and throughout the country.

Perrin Conferences’ annual Insurance Coverage & Allocation Issues Conference is set for April 11, 2018 at The Bellevue Hotel in Philadelphia. This conference will feature a large contingent of… (PRWeb March 30, 2018) Read the […]

PHILADELPHIA (PRWEB) May 11, 2020 Pennsylvania labor, employment and workers’ compensation law firm Willig, Williams & Davidson is pleased to announce that 16 of its attorneys have been named 2020 Pennsylvania Super Lawyers and Rising […]

Chicago, IL (Law Firm Newswire) August 20, 2015 – Most sexual harassment cases are documented by a victim, reported to someone in authority and possibly taken to an experienced employment attorney. This unusual case lacked […]