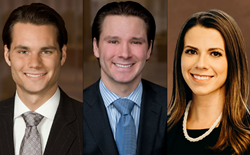 Dr. Conklin was hard-working, compassionate, altruistic, and an overall wonderful person for his siblings to have had in their lives. It is heartbreaking that this family lost the support of their beloved brother.

Attorneys Patrick A. Salvi II, Brian L. Salvi, and Carly E. Shannon of Salvi, Schostok & Pritchard, P.C. obtained a $1.3 million verdict for the family of a motorcyclist who was killed by a truck driver who attempted to make an improper left turn.

On November 4, 2015, 44-year-old Dr. Patrick Conklin was on his way to work at West Suburban Medical Center, traveling westbound on Chicago Avenue in the city’s West Town neighborhood, when he was struck by a pickup truck that attempted to make a left turn from eastbound Chicago Avenue onto Wood Street. Dr. Conklin was transported to Stroger Hospital where he was pronounced dead. He is survived by his six siblings between the ages of 52 and 68, who all live in Wisconsin.

The driver of the pickup truck, who was on duty working for Selco Industries, told responding officers the traffic signal was yellow going to red when he started to make the turn. But an eye witness told police Dr. Conklin had a green light at the time of impact.

During trial, Plaintiff’s attorneys argued the driver of the pickup truck did not yield the right of way and failed to keep a proper lookout when starting his left turn. The defense presented expert testimony that Dr. Conklin was traveling 54 MPH in a 30 MPH speed limit zone. The defense argued that Dr. Conklin’s speed was the cause of the collision, not the defendant’s left turn.

“This was a difficult liability case, but ultimately the jury decided that the defendant created the hazard when he made his left turn in front of Dr. Conklin,” Attorney Brian L. Salvi said. “Dr. Conklin was hard-working, compassionate, altruistic, and an overall wonderful person for his siblings to have had in their lives. It is heartbreaking that this family lost the support of their beloved brother.”

For more information on this case or to schedule an interview, please contact Marcie Mangan at (312) 372-1227 or mmangan@salvilaw.com.

[Case No. 16 L 7213 MARY MALINOWSKI, as the Special Administrator of the Estate of Patrick Conklin, Deceased, Plaintiff, vs. JASON GILBERT, Individually and SELCO INDUSTRIES, INC., an Illinois Corporation, Defendants.]

Attorney John Q. Kelly Appears on Fox News to Discuss the Case of a…

September 10, 2019 myadminsite Law Attorneys Comments Off on Attorney John Q. Kelly Appears on Fox News to Discuss the Case of a…

ATTORNEY JOHN Q. KELLY “You are allowed to use reasonable force to protect yourself and your family from bodily harm,” Kelly commented. GREENWICH, Conn. (PRWEB) September 09, 2019 Connecticut banker Scott Hapgood is accused of […]

“Our diversity and inclusion Sparks offer HR and learning leaders a fresh way to reinforce training and educational efforts, and keep a culture of inclusion front and center throughout the year,” said Mike Pallatta, Traliant […]