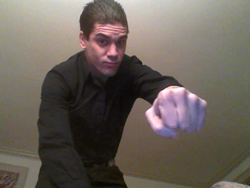 Jackson Phillips, Esquire, of JP Law is ready to fight for your rights.

Welcome to a Law Firm that Cares More, Works Harder, and Charges Less

The Law Offices of Jackson Phillips, Esquire, LLC ("JPLaw") opened their doors for business over two weeks ahead of their announced launch date of January 2, 2019. JPLaw is an old-fashioned general practice law firm that gives consultations on legal problems across the board and helps potential clients find the lawyer best-suited to their issue- even if that lawyer is employed by a direct competitor.

As a new firm, JPLaw cannot (nor should it) promote itself as being an "expert" in any practice area. JPLaw has no statistical data, but its professional projections anticipate over 90% of its business coming from the Family Law arena- an area that Jackson Phillips, Esquire, CEO and sole proprietor describes as being "...a natural fit because of my desire to help people, one person at a time." The firm also anticipates a smattering of clients in personal injury law as well as real estate and general civil litigation.

Helping people is something this firm has put a lot of thought into. JPLaw appears dedicated to helping with general charitable causes. Its website, http://www.jacksonphillipsesq.com, promises to donate 10% of all yearly profits to charity. More specifically, the website reads:

"The two charities selected for equal donations are the American Foundation for Suicide Prevention (“AFSP”) and the Brain and Behavior Research Foundation (“BBRF”). AFSP is an organization devoted to raising awareness, funding scientific research, and providing resources and aid to those affected by suicide, and BBRF is an organization dedicated to funding cutting-edge research to find cures for mental illnesses. As an attorney with bipolar disorder, I am concerned both with heavily-funded research and with eliminating the stigma associated with the condition."

Mr. Phillips candidly admits that he chose those particular firms because, as a an attorney who suffers from bipolar disorder (a rare creature), he can personally identify with the horror of suicidal thoughts that won't go away, and he has fallen asleep many nights to hopes of a medical breakthrough that would allow him to be more "normal."

When asked whether his openness about mental illness will cause him to lose business, Mr. Phillips said, "That is for God to know. I make no representation to know the answer. However, I do represent that I regularly and passionately attack my mental illness with psychiatry, group sessions, and periods of reflection built into my day at reasonable intervals.

Candidly, I would argue that the insane lawyers are the ones with the nerve to charge $400 per hour or more, merely CAPITALizing on an often forgotten truth about CAPITALism. It only works in a society where people operate according to moral obligations that prevent them from gobbling up every resource in sight like a greedy-lawyer versions of Pacman. Ironically, the $75 dollars per hour I charge seems quite sane, don't you think?"

And there it is, the remarkable hourly rate of $75 that undercuts competing rates by so much that it actually appears to be a moral decision- not a business decision. The hourly rate is just one example of JPLaw having stated policies to its own direct disadvantage and for the purpose of improving the customer experience:

Example: Any client who calls JPLaw and gets no return call within 24 hours gets the entire representation free. To quote Mr. Phillips, "You have a right to talk to your lawyer when you want to, not when they are free."

Example: JPLaw schedules consultations 24/7, making appointments around the clock to cater to night shift workers as well as those of us who live by day.

When asked what precipitated the early start, Mr. Phillips said that, "The phones were a'ringin, and I was ready to go."

There is one ideal that tops JPLaw's client-centered priority. JPLaw has made it clear on its website that its number one obligation is to the truth. It, "will offer a vigorous representation... within the Model Rules and our collective conscience."

Well, there is a new law firm in the Tri-State area. From the looks of things, it might make a splash in the legal community.

This recognition is reflective of the hard work our attorneys put in for each client. Being included in Super Lawyers is an honor and a tremendous compliment from our peers in the legal community. DALLAS […]