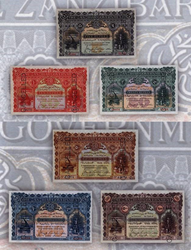 The "Holy Grail" of Banknotes

In general, deals of this magnitude are not common in paper money collecting, but in world currency specifically, they are unheard of. These treasures are among the most special notes I have ever seen, handled, or even heard about.

It was acknowledged today by John Markis, Founder and CEO of Trusted Traditions of Ft Lauderdale, Florida, September 5, 2017 that a premier team of banknote specialists was assembled to gather together what has become one of, if not the rarest group, of world banknotes to ever change hands in modern history. Along with Markis, the major facilitator was Barnaby Faull, from Spink & Sons, London and Aris Maragoudakis of Stacks/Bowers.

The banknote group in question was six notes from the Indian Ocean country of Zanzibar and they were the Rarest major paper money notes ever issued by that country. The set included the 5, 10, 20, 50, 100 and 500 Rupee dominations with the 500 Rupees being so rare it has been likened to a “Watermelon” U.S. Currency note with only one known in it's existence.

To illustrate the high value of these historical collectible notes in January of 2017 Stack’s Bowers sold a 5 Rupee version, graded Very Fine 35 by PCGS, for $129,250 by itself. Barnaby Faull of Spink & Sons, London was quoted as saying “I have been in the business over 40 years and I reckon every year we see a few ‘specials’, once a year a ‘treasure’, and once every five years an ‘unbelievable find’. The Zanzibar set ranks up there as an ‘unbelievable find’. It is rare to find a note I have not seen before but the Zanzibar 500 Rupee is one. I am delighted the set has found a good home and will be truly appreciated. It has been an amazing experience dealing with the set and is good to see intercompany cooperation at this level. Banknotes truly do cross borders.”

John Markis of Trusted Traditions commented, “This sale is a lifetime thrill that will not wear off for the buyer or myself for a very long time. My specialty is finding the ‘Holy Grails’ of banknotes for my clients to fill gaps in their collections. Over my 30-year career this deal ranks at the top.”

The set, as constituted, was last sold in a private sale in 2015 for an undisclosed amount. Even then John Markis was quoted as saying “In general, deals of this magnitude are not common in paper money collecting, but in world currency specifically, they are unheard of. These treasures are among the most special notes I have ever seen, handled, or even heard about.” Statements such as this from Markis are telling as his firm regularly has several thousand world banknotes in inventory; along with a full selection of United States issued historical banknote versions.

Because of the magnitude of the sale all parties have remained silent as to the dollar volume involved, the seller and buyer’s names, and any specific terms of the sales. John Markis and Trusted Traditions are in Ft Lauderdale, Florida and he may be contacted through his website http://www.trustedtraditions.com, or email sales(at)TrustedTraditions(dot)com. His office is located at 275 Commercial Blvd., Lauderdale by the Sea, Fl 33308 and the phone number is 954-938-9700.