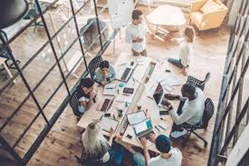 The US workforce benefits from the talents of people from throughout the world, says the Law Offices of Henry A. Posada

The facts show that reducing immigration would actually harm millions of US workers.

A July 7th op-ed at The Hill argues that a factual assessment of immigration shows that driving down immigration would have the almost certain effect of harming the US economy. “Without immigration, the U.S. labor force would be shrinking and growth prospects would be dimmer,” writes economist Gregory Daco. Los Angeles immigration attorney Henry A. Posada says that the enormous importance of immigrants to the United States economy is obvious in a great many ways.

People who come to the United States from elsewhere are among the most motivated of individuals, both as entrepreneurs and employees, says Mr. Posada. Pulling up stakes and heading to a new country in pursuit of a better life requires genuine energy and commitment, he says. In addition, the evidence is clear that, contrary to the opinions of immigration restrictionists, the facts show that reducing immigration would actually harm millions of US workers.

Mr. Posada notes that many native-born Americans think of the job market as a zero-sum game where the arrival of every foreign national into the workforce means one less job for native-born Americans. Mr. Posada notes this belief is belied by data such as a 2018 working paper from the National Bureau of Economic Research which found that 25% of all new businesses in the US are founded by foreign nationals, even though foreign-born individuals comprise less than 14 percent of the US population. Mr. Posada says that his own work on business immigration matters demonstrates the importance of newcomers to US business.

Specifically, Mr. Posada notes that more and more companies are going outside of the United States to pursue individuals with very specific technical skills and knowledge that may be in short supply stateside. He says that, while H1B visas can still be obtained with the help of skilled legal counsel, concerns remain about the program. These concerns stem largely from pointed criticism of the program from President Trump, who has also admitted to using the H1B program himself. Access to experienced legal counsel is only going to become more important, Mr. Posada concludes.

Readers who may be interested in obtaining services for themselves or someone close to them are invited to reach out to the Law Offices of Henry A. Posada at (562) 904-9080. They can also visit the law firm’s website at https://www.hposadalaw.com/.

Edward M. Gardner My dad was a wholesaler of food and we would get returned non-perishable food back from grocers. The food was still good so we would always donate it. We take from the […]

It’s important for Texas and Illinois attorneys to have professional liability insurance. Without it, malpractice court judgments or settlements can end up coming out of a lawyer’s or law firm’s own pockets, creating financial hardship. […]