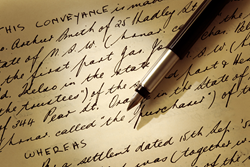 Mistakes on recorded deeds are corrected by either re-recording the deed, preparing a new corrective deed or a corrective affidavit.

One cannot assume because a deed for California real property has been recorded and accepted by the recorder’s office that it is error free. If the deed meets the formatting and content requirements it may still contain errors. This Tip Sheet explains how mistakes on recorded deeds are corrected by either re-recording the deed, preparing a new corrective deed or preparing a corrective affidavit.

A correction deed or re-recording of a deed requires the original grantor’s signature. Any instrument presented for recordation which corrects or is re-recorded to modify the provisions of a previously recorded document becomes part of the chain of title. All corrections require the following on the first or cover page; corrective statement, error identification, clear reference to the previously recorded document.”

Mistakes on recorded deeds can be corrected by either re-recording the deed, preparing a new corrective deed or preparing a corrective affidavit. A re-recording of the original document with corrections is made in the body of the original document, re-signed and re-acknowledged. A correction deed is a new deed signed and acknowledged by the grantor. A correction affidavit can be signed by either party but is used in limited situations.

This press release was authorized by Mark W. Bidwell, an attorney licensed in California. Office is located at 4952 Warner Avenue, Suite 235, Huntington Beach, CA 92649. Telephone is 714-846-2888. More information is available at http://www.DeedAndRecord.com.

This series provides a guided tour of the various borrowing options available to businesses, from both a business and legal perspective. CHICAGO (PRWEB) June 04, 2020 The first episode in this series is titled “What […]