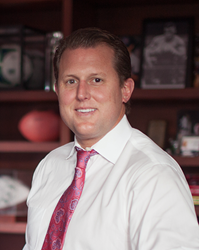 It is truly an honor to rank alongside some of the finest attorneys this country has to offer.

“It is truly an honor to rank alongside some of the finest attorneys this country has to offer,” said Mark Thiessen. “I am deeply grateful to the fine people at Thomson Reuters and to my clients for providing me with the inspiration and the opportunity to do the work that I do.”

Thiessen was selected as a Super Lawyer through Thomson Reuters’ patented, intensive selection process. In addition to being nominated by his peers, Thiessen also passed a 12-factor evaluation for professional achievement as assessed by an independent research committee, a process that only 5 percent of Texas’ applying attorneys are able to complete successfully.

Prior to his Super Lawyers awards, Thiessen had also won Thomson Reuter’s Rising Star Award for three succeeding years. However, in 2013 at the age of 35, Thiessen transitioned from Rising Star to Super Lawyer, which is an achievement typically not awarded to attorneys under 40 unless their rankings were high. Only 2.5 percent of applying attorneys in each state are eligible to be distinguished as a Rising Star, and Thiessen won during each year he was nominated.

Super Lawyers, a Thomson Reuters business, is a rating service of outstanding lawyers from over 70 practice areas who have attained a high degree of peer recognition and professional achievement. The Super Lawyers lists are published nationwide in Super Lawyers magazines and in leading city and regional magazines across the country. For more information about Super Lawyers, go to http://www.superlawyers.com.

Byron Encalade, President of LOA, said, “We rely on our reefs to make a living and to protect our communities. So it’s a big deal when these tugs rip up our waterbottoms. I’m glad we […]

How to Correct a Deed in California, Tip Sheet by Deed and Record

May 23, 2019 myadminsite Law Comments Off on How to Correct a Deed in California, Tip Sheet by Deed and Record

Corrective Deed Mistakes on recorded deeds are corrected by either re-recording the deed, preparing a new corrective deed or a corrective affidavit. HUNTINGTON BEACH, Calif. (PRWEB) May 23, 2019 One cannot assume because a deed […]