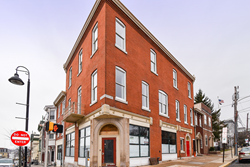 The residential situation at the corner of Dekalb and East Airy Streets in Norristown was dire. The apartments were in very bad shape and the rent it brought in wasn’t enough for the current landlord to keep the property going. That’s when the partners at High Swartz Law Firm just a couple of doors down stepped in.

Approaching 100 years old, 425 Dekalb is the corner building of Dekalb and East Airy Streets which connects to High Swartz’s offices. To say that High Swartz is bound to Norristown and its overall history would be an understatement. Their building was constructed and opened its doors in 1935. The firm partners saw the opportunity to acquire 425 Dekalb and keep it under High Swartz ownership until the right situation came along.

Enter Ian Truelove, a British developer from Warminster, PA, his son Dominic Truelove and Jared Gruber of JG Real Estate in the winter of 2017. Ian states that the building had good 'bones' and is a Victorian architectural eye-catcher. It’s an asset worth preserving for Norristown and the Montgomery County community. The potential was there, although the space needed a lot of work. High Swartz quickly initiated the sale, confirming Ian’s sentiment of the building’s significance and its importance to the Norristown neighborhood.

To understand why Ian Truelove was in the position to develop the building you must first understand his background. While on a visit from London, Ian met his wife Jean through mutual friends in the Delaware Valley area. On top of the relationship, Truelove loved the Montgomery County suburban countryside and the convenience of the American way of life. In short, the Trueloves wanted to start a family here, and that they did. Ian and his wife are the proud parents of 10 children, ranging from 19 to 37, nine boys and one girl.

After obtaining historic approval for the project, Truelove requested the assistance of local architects Seiler & Drury for the zoning and code approvals process. Building engineers were hired, consulted and plans were drawn up to solve the structural issues that manifested over many years. The basement was in total disrepair with distinct mold issues that needed remediation. Father Time and the effects of a nasty fire and roof leaks had caused the central spine of the building to sag. Ian turned to his son Luke to find a way to support the floors during construction.

The good bones that Ian stated the building had made it paramount for him to reclaim as much history as possible. On top of saving the terra cotta roof coping tiles, Ian dismantled, refurbished and reinstalled the original Victorian stair rail. Entry doors were refinished and repainted in period-correct Victorian red. Original window apertures were restored and energy-efficient full-sized sash windows were installed. It was then that the crew discovered an original short stair that had been covered up during apparent mid-century home improvements. When originally built, this stair enabled the shopkeeper and family to have direct access from the home above into the storefront and basement below.

After almost a year of repairs and rehabbing, the spaces were ready to be unveiled. The restaurant offers a prime opportunity for tenants to appreciate the history of the building. It’s equipped with an ADA-compliant bathroom and second bathroom with original fittings. There is full basement access under the restaurant-space and adjoining kitchen. Areas of exposed original red brick embellish the dining area while a reclaimed Victorian enamel stove found in the basement sits as decor. The apartments similarly have a taste of the old and new. Quartz countertops sit next to a Victorian baking oven that now is simply a statement piece. Ornate columns and trimwork were rehabbed and solid oak floors were installed throughout each apartment.

In all, Truelove converted the space into 4 luxury apartments and restaurant space. On February 21, Truelove hosted an open house for local Norristown Zoning and Code Officials and Council members. The feedback has been tremendous and the results speak for themselves. Being able to save an important building from new construction is one of Ian’s proudest accomplishments. That of course, and the births of Jean and Ian's 10 children.

To view photos of the restoration and finished apartments visit highswartz.com.

Kate Desai, CPA Kate has provided exceptional service and shown unwavering dedication to our clients; they have come to rely on her keen intellect, deep insights and proven experience for a range of tax, compliance […]

“IP is one of the key assets of a successful company. In order to protect and keep the IP up2date, I have decided to join the professionals from ideaship..” said Volker Dahm, CEO of Safedeploy. […]

Brynn Powers, Division Manager, North American Title Co.’s Greater Sacramento/Northern Nevada region. He is a true champion for our associates and is fully committed to giving them the resources and platform they need to serve […]