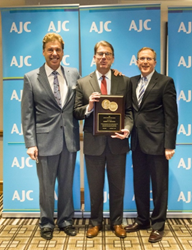 AJC New Jersey’s Learned Hand Award honors leaders in the legal profession who demonstrate their commitment to democratic values and the rights of individuals. Bernstein was honored at an awards dinner on Dec. 11 at the Hilton in Short Hills, New Jersey.

Bernstein, based in the firm’s New Jersey office, focuses his practice on labor and employment exclusively for management, with an emphasis in litigation and counseling. With more than 35 years of experience, Bernstein has represented many multinational and domestic corporations in a wide range of industries. His practice extends to more than 40 jurisdictions across the United States, involving most workplace issues, including class and collective actions, employee benefits, and trade secret litigation.

Bernstein is consistently recognized for his legal achievements which include The Legal 500 United States in Labor and Employment Litigation and ERISA Litigation and New Jersey Super Lawyers. He has also been rated AV Preeminent 5.0 out of 5 by Martindale-Hubbell, is a former member of LexisNexis Martindale-Hubbell Legal Advisory Board and a life member of the National Registry of Who’s Who Among Executives and Professionals, Honors Edition from 2008-2009.

Greenberg Traurig, LLP (GTLaw) has more than 2,000 attorneys in 38 offices in the United States, Latin America, Europe, Asia and the Middle East and is celebrating its 50th anniversary. GTLaw has been recognized for its philanthropic giving, was named the largest firm in the U.S. by Law360 in 2017, and is among the Top 20 on the 2017 Am Law Global 100. Web: http://www.gtlaw.com Twitter: @GT_Law.

NEW YORK (PRWEB) March 06, 2020 Everyone by now has heard about the coronavirus. Whether it be through social media, Whatsapp, or the mainstream media, no one really seems to know what it is and […]

TorkLaw is now taking COVID-19 Business Interruption Insurance Claim Denial cases on behalf of business owners or operators who have been adversely impacted by COVID-19. “Business owners and operators have reported insurance companies are denying […]