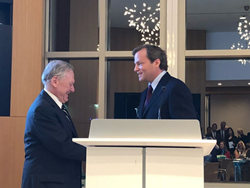 The firm’s General Counsel, Martin I. Kaminsky, accepted the award on behalf of his colleagues.

Global law firm Greenberg Traurig, LLP’s pro bono team has been honored for their legal advocacy by the National Organization on Fetal Alcohol Syndrome (NOFAS) at their 2018 NOFAS Celebration of Champions benefit held Nov. 14 in Washington, D.C. The firm’s General Counsel, Martin I. Kaminsky, accepted the award on behalf of his colleagues.

“We are incredibly proud to receive this distinction from NOFAS and to be part of this effort to support people and communities living with and affected by FASDs,” said Litigation Shareholder Caroline J. Heller, chair of the firm’s Pro Bono Program.

As a juvenile, Butler, who has Fetal Alcohol Syndrome, was sent to an adult prison after his conviction for minor offenses. When he was repeatedly victimized while he was incarcerated, he killed his attacker in self-defense. Due to his disability and earlier inadequate legal defense, Butler was sentenced to life in prison without parole, and served 23 years until Greenberg Traurig’s pro bono team’s successful intervention.

NOFAS is the only international nonprofit public health advocacy organization that works to prevent prenatal exposure to alcohol, drugs, and other substances known to harm fetal development. The organization also works to raise awareness, educate and support women before and during their pregnancy, as well as individuals, families, and communities living with FASD and other preventable intellectual/developmental disabilities. For more information, visit http://www.NOFAS.org.

About Greenberg Traurig, LLP: Greenberg Traurig, LLP (GT) has more than 2,000 attorneys in 38 offices in the United States, Latin America, Europe, Asia, and the Middle East. GT has been recognized for its philanthropic giving, was named the largest firm in the U.S. by Law360 in 2017, and is among the Top 20 on the 2018 Am Law Global 100. Web: http://www.gtlaw.com Twitter: @GT_Law.

“The addition of these talented leaders is critical to our achieving our growth goals and, most importantly, to our continuing to exceed our clients’ and candidates’ high expectations,” said Kirsten Vasquez, vice president, law firm […]

As we often tell clients: You have a situation. We have a solution. CLEVELAND (PRWEB) July 06, 2020 Bruce Hennes, Chief Executive Officer of Hennes Communications, has been named to the 2020 LAWDRAGON Global 100 […]