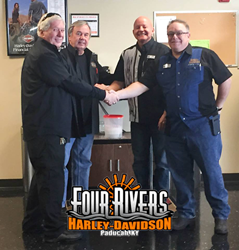 Without George Chaconas, this deal never would have happened!-Sellers of Four Rivers Harley-Davidson

Nearly one year after their flagship purchase of Tifton Harley-Davidson in Georgia, Eric Sternberg and Eddy Soberon acquired Four Rivers Harley-Davidson. Eric and Eddy both have extensive backgrounds in Harley-Davidson dealership ownership and management and just a year ago, decided to become partners. They will keep the name Four Rivers Harley-Davidson and continue to operate at its current location at 3005 Old Husbands Road in Paducah, Kentucky. When asked about the services provided by George Chaconas and Performance Brokerage Services, buyers commented, “This is our second Harley-Davidson dealership that George has helped us purchase. In both cases, if it wasn’t for George’s professionalism, persistence, follow up, discipline and commitment, we are very confident that these transactions would have never closed.”

George C. Chaconas, the exclusive agent for this transaction and the head of the National Harley-Davidson and Powersports Division for Performance Brokerage Services commented, “Jerry and Jack had an incredible run at Four Rivers Harley-Davidson and it was an honor assisting these gentlemen with accomplishing their goals. Their legacy and commitment to the community will be carried on by Eric and Eddy, who exemplify the same passion and enthusiasm for the Harley-Davidson brand, employees and customers. I thank all 4 gentlemen for the opportunity to have been involved in another miracle and these life changing events.”

The company offers a different approach to the automotive, Harley-Davidson and Powersports industries by providing complimentary dealership assessments, no upfront fees, no reimbursement of costs and is paid a success fee only. Performance Brokerage Services gets paid only after the client gets paid.

Salvi, Schostok & Pritchard has a demonstrated record of unparalleled success in and out of the courtroom. I am honored to be a part of such a talented team and look forward to the challenges […]

The Enhanced Model Term Sheet v1.0 provided legal and economic insights that the industry has never seen before. Now with version 2.0, NVCA and Aumni are taking it to another level. WASHINGTON (PRWEB) June 02, […]