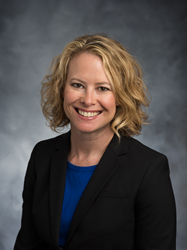 The national law firm of Foley & Mansfield today announced that Abby K. Rooney has been named to the position of Chief Operating Officer for the 175+ attorney firm.

Rooney will have oversight responsibility for the operational aspects of the firm’s 16 offices and support staff. She succeeds recently-retired COO Mona Nore, who served in that position since May, 2014. Abby originally joined the Firm’s Human Resources team in 2006, and was subsequently named Director of Human Resources in 2014. She will retain that title in addition to assuming the COO role.

Abby is a member of the Society For Human Resources Management and the Association of Legal Administrators, where she currently serves on the Board of Directors of the Minnesota Chapter as Past President. She holds the Professional in Human Resources (PHR) certification from the HR Certification Institute.

“Abby has a demonstrated commitment to developing top talent and best practices throughout the Firm’s 16 offices, and is uniquely qualified to drive operational excellence as our new COO,” said Kyle B. Mansfield, founding partner.

St. Louis Criminal Defense Lawyer – Chris Combs It’s a true honor to be recognized by the AILC as one of the 10 best lawyers in Missouri. It’s a reflection of the hardwork my firm […]

Despite New ‘Ban the Box’ Laws Debate Continues to Confuse Use of Criminal Records, Opines CriminalBackgroundRecords.com

November 13, 2017 myadminsite Law Attorneys Comments Off on Despite New ‘Ban the Box’ Laws Debate Continues to Confuse Use of Criminal Records, Opines CriminalBackgroundRecords.com

Criminal Background Records Now, with the new law in Arizona and on-going debate in Iowa, is the time for all hiring managers to ensure polices for pre-employment background screening are fully compliant with law. WALTHAM, […]