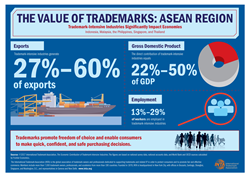 “This study adds to the growing body of global research on the importance of trademarks,” said INTA CEO Etienne Sanz de Acedo.

A new impact study released today by the International Trademark Association (INTA) reports that industries which intensively use trademarks contribute significantly to five major economies in the Association of Southeast Asian Nations (ASEAN) region. Analysis from The Economic Contribution of Trademark-Intensive Industries in Indonesia, Malaysia, the Philippines, Singapore, and Thailand indicates that trademark-intensive activities generate increased employment across sectors and added contributions to international trade. Trademark-intensive industries are defined as those industries which file more trademarks than other industries–weighted against total employment in that industry.

The release of the report coincides with the 50th anniversary of the ASEAN, which has successfully grown to become the world’s seventh-largest market and home to the third-largest labor force over the last half century. INTA commissioned the report from Frontier Economics, an internationally recognized economics research firm. The study is the first of its kind to analyze the correlation between trademarks and their economic impact on contribution to Gross Domestic Product (GDP), share of exports, and employment in major markets in Southeast Asia. Looking at data from 2012 to 2015, it captures both the direct and indirect value that trademarks yield to economies, governments, and consumers, and analyzes the central role of trademarks in accelerating economic development and increasing export shares within cross-border supply chains.

“This study adds to the growing body of global research on the importance of trademarks,” said INTA CEO Etienne Sanz de Acedo. “These results underscore the immense potential for cross-sectoral economic growth that can be unlocked by promoting the value of trademarks with the business community, government, and the general public, and by further developing national trademark systems and trademark-intensive industries.”

"As we explore the long-term economic and social implications of trademarks and related intellectual property rights, it becomes increasingly important for both public and private sectors to scale up engagement on this issue, as well as support government efforts to further trademark and brand development and protection,” said Mr. Sanz de Acedo.

The ASEAN impact report and infographics can be downloaded here.

About INTA
The International Trademark Association (INTA) is the global association of trademark owners and professionals dedicated to supporting trademarks and related IP in order to protect consumers and to promote fair and effective commerce. Members include more than 7,000 trademark owners, professionals, and academics from more than 190 countries, including 289 members in the ASEAN region, who benefit from the Association’s global trademark resources, policy development, education, training, and international network. Founded in 1878, INTA is headquartered in New York City, with offices in Brussels, Santiago, Shanghai, Singapore, and Washington, D.C., and representatives in Geneva and New Delhi. For more information, please visit http://www.inta.org.

We strongly believe innovation and competition in the marketplace are critical for the future of the ethanol industry, and look forward to the decision of the U.S. Patent Office’s Patent Trial and Appeal Board. WILMINGTON, […]

US and European Patents for Systems and Methods Involving NURBS for…

September 23, 2020 myadminsite Law Intellectual Property Comments Off on US and European Patents for Systems and Methods Involving NURBS for…

OceanTomoBidAsk.com The technological advancement employs a mathematical approach to NURBS instead of conventional free form geometry creation. CHICAGO (PRWEB) September 23, 2020 Ocean Tomo Transactions, LLC will auction a portfolio of US and European issued […]