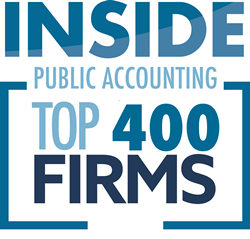 Fifty-two CPAmerica member firms are being recognized for their accomplishments in INSIDE Public Accounting (IPA) Survey and Analysis of Firms, among the longest-running, up-to-date ranking of the nation’s largest accounting firms.

IPA’s annual rankings of the 400 largest firms in the U.S. are listed from the multi-billion-dollar U.S. based Big 4 to the $5 million in net revenue. The list includes firm headquarters, MP, net revenue, ranking in the previous year and percentage change. The rankings are compiled from data gathered in the annual IPA Survey and Analysis of Firms, which attracts participation from more than 500 firms.

CPAmerica congratulates the following firms on their recognition:

For the complete listing of INSIDE Public Accounting Top 400 Firms, please visit: https://insidepublicaccounting.com/top-firms/ipa-400/.

About CPAmerica, Inc.:
An accounting association made up of independent certified public accounting firms that built on four key goals: to continuously improve; to make more money; to strengthen relationships among member firms; and to bring prestige to firms both domestically and internationally. As a member of Crowe Global, a top-10 global accounting network, CPAmerica expands to over 286 independent accounting and advisory services firms in 130 countries and has a combined firm revenue of $4.2 billion. Learn more about CPAmerica at https://www.cpamerica.org/.

PHOENIX (PRWEB) November 17, 2020 Every year over the past 10 years, the U.S. News & World Report and Best Lawyers recognize “Best Law Firms” for professional excellence in serving their communities. Lawyers connected with […]

May 9, 2021 myadminsite Law Comments Off on Guard911 Awarded State of Florida Department of Education Security…

Guard911 apps were designed with a single focus – to provide an early warning system for these emergency situations and save precious seconds that can mean the difference between life and death. For over three […]

It’s truly rewarding to be able to bring clients to the closing table, but to know we did a perfect job from start-to-finish is truly priceless. MANALAPAN, N.J. (PRWEB) January 29, 2019 NJ Lenders Corp. […]