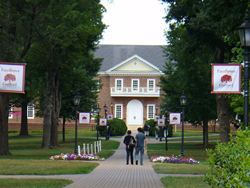 Guilford College is the subject of a civil class action suit alleging that it systematically discriminates against its women's athletic teams in violation of Title IX law.

Even though Title IX has been the law since 1972, and athletic participation rates have significantly increased since its enactment, girls and women do not yet have equal opportunities in all areas of athletics. Currently, high schools are providing 1.3 million fewer chances for girls to play sports as compared to boys, and girls’ opportunities still have not reached the rates afforded boys when Title IX was passed. Even though more than half of all students at NCAA schools are women, they receive only 44% of the athletic participation opportunities, and as of 2012 (40 years after the passage of Title IX) women still had over 60,000 fewer participation opportunities than their male counterparts at NCAA schools. At the typical top-level athletic schools in Division I-FBS (formerly Division I-A), female athletes receive about 28% of the total money spent on athletics, 31% of the recruiting dollars, and 42% of the athletic scholarship dollars.

The current and former Guilford coaches and students allege that while more than 50% of the undergraduate student body is female, Guilford provides male athletes about 20% more opportunity to participate in its athletic programming. The suit further alleges that Guilford provides superior benefits and treatment to its male athletes with respect to the provision of equipment and supplies; scheduling of games and practice time; travel and per-diem allowance; opportunity to receive coaching and academic tutoring; assignment and compensation of coaches and tutors; provision of locker rooms, practice and competitive facilities; provision of medical and training services; provision of housing and dining facilities and services; and publicity.

The two coaches further allege that Guilford College discriminated against them because they coached female athletes and retaliated against them for complaining about gender equity issues and violations of Title IX by intentionally creating unduly difficult work environments and forcing one of them out of a job while removing the other from the position of head coach of a women’s team.

The case was brought in the Middle District of North Carolina federal court on behalf of the plaintiffs by Duffy Law, LLC in New Haven, CT. Attorney Felice Duffy is a pioneer in both U.S. women’s soccer and in Title IX. She filed a Title IX action against the University of Connecticut as an undergraduate in 1978 to compel the funding of a women’s varsity soccer team. Duffy was a D-1 All-American and a member of first U.S. National Team. She went on to become head coach of the Yale women’s soccer team for 10 years before going to Quinnipiac law school, where she graduated first in her class.

After stints at major NY and CT law firms, and two federal clerkships (one of which was with the Honorable Stefan R. Underhill who was the presiding judge in the 2009 Biediger v. Quinnipiac University lawsuit which found the school had violated Title IX in its athletic programming), Duffy became an Assistant United States Attorney in the District of Connecticut and prosecuted cases in both the Violent Crimes and Major Crimes units. She also served as Outreach Coordinator for the District, and in that role trained numerous local and campus law enforcement and college athletic personnel on sexual assault prevention and compliance with Title IX. She opened her own firm in 2015 focusing on Title IX violations for athletics, sexual misconduct, and serious Conduct Code Violations at schools, and has represented more than 40 students and staff across the country.

The entire case record is available online with a subscription to Pacer.gov or PacerMonitor.com, a Federal District Court Monitoring service, by searching for: UNITED STATES DISTRICT COURT FOR THE MIDDLE DISTRICT OF NORTH CAROLINA Case# 1:17-cv-932

James’ experience and expertise will help us grow responsibly and strategically while bringing a higher level thinking and action to our team, our clients, and the community. It is precisely the sort of initiative that […]

AMG Expands Charitable Reach to Victory Junction AMG is dedicated to giving back to the communities we manage and to serving the Triad at large. GREENSBORO, N.C. (PRWEB) September 20, 2017 Association Management Group (AMG), […]