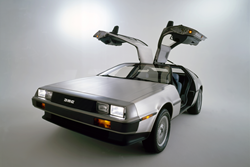 Elysian has agreed to cease its use of DELOREAN and acknowledges that DeLorean Motor Company owns the famous DELOREAN brand.

On 16 February 2018, DeLorean Motor Company filed a lawsuit in the United States Federal District Court for the Southern District of New York (Civil Action number: 1:18-CV-01421) against Elysian Cosmetics for its use and attempted registration of the trademark DELOREAN for its Age-Suspending Treatment Primer, a cosmetic utilizing the name “DELOREAN”. DeLorean Motor Company alleged trademark infringement, trademark dilution, unfair competition and other causes of action under both federal and New York state law.

DeLorean Motor Company builds, sells, services and restores DeLorean automobiles at its 40,000 square foot headquarters in suburban Houston, Texas, and affiliated dealers in Florida, California and Illinois. The company also has an extensive licensing program which it uses to promote the DELOREAN brand. The company currently licenses over 40 products, including toys, clothing, watches and luggage. These products can be found at http://www.delorean.com or at the company's dealerships.

"We are pleased that we have been able to settle this lawsuit amicably," said Stephen Wynne, CEO of DeLorean Motor Company. “We can now continue, without distraction, to build our business with the knowledge that our rights in the DELOREAN brand remain exclusive."

Quimbee Is Named an American Bar Association Bar-Prep Provider and…

September 22, 2018 myadminsite Law Comments Off on Quimbee Is Named an American Bar Association Bar-Prep Provider and…

Quimbee When our team sat down to build a bar course, we realized that if we wanted to meaningfully increase passage rates, then we couldn’t just do what everyone else is doing. CHARLOTTE, N.C. (PRWEB) […]

Casemaker and Fastcase Merge to Become the Leader in Legal Research…

January 5, 2021 myadminsite Law Comments Off on Casemaker and Fastcase Merge to Become the Leader in Legal Research…