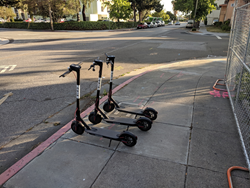 The rapidly increasing popularity of rental scooters among the youthful population of major cities nationwide – definitely including Los Angeles – means that new hazards are on the way for both users of the scooters and pedestrians.

A September 20th article in the Richmond Times-Dispatch reports on the death of a 24 year-old Dallas man after falling from a rented scooter. The death was ruled to be the result of a head trauma. As the article points out, the tragedy comes in the wake of rapidly increasing scooter injuries nationwide and a new California law legalizing helmetless scooter driving for adults. Los Angeles based personal injury law firm Legal Defenders at the Law Offices of Burg & Brock says that the incident points out the importance of individuals taking responsibility for their own safety.

The law firm says that the rapidly increasing popularity of rental scooters among the youthful population of major cities nationwide – definitely including Los Angeles – means that new hazards are on the way for both users of the scooters and pedestrians. The law firm notes that there’s no particular reason to believe that driving scooters are any safer than other small vehicles, and the hazards associated with smaller vehicles are well established. The fact that many users tend to stay on sidewalks may limit the chances of accidents involving cars and trucks, but it also exposes pedestrians to a new and potentially serious risk, since electric scooters may be faster than most bicyclists are able to go.

The Richmond Times-Dispatch article quotes Dr. Sam Torbati, medical director of the Los Angeles Cedars Sinai Emergency Department, pointing out that electric scooters are essentially slower mopeds. "People seem to feel safe since it looks like a recreational tool, but it comes with potential for serious injury." Legal Defenders adds that, while the temptation to eschew helmets is understandable in terms of convenience, it’s important for adults to realize that the risks of death from a head trauma are very real, and that protection of the head while driving these kinds of vehicles may be important as wearing a seat belt in a car. It’s also important, the law firm says, to be aware of the safety of pedestrians on sidewalks and streets; driving a scooter while distracted or under the influence is not only illegal but could create serious liability issues in the event of a collision. The firm concludes by noting that, while California may permit adult scooter riders and bicyclists to avoid helmets, riders should be extremely aware of their adult responsibilities and make thoughtful and responsible decisions.

Interested readers who like to learn more about Legal Defenders at the Law Offices of Burg & Brock may call (800) 926-8197 or visit the firm’s website at http://www.LegalDefenders.com.

May 5, 2018 myadminsite Law Attorneys Comments Off on Author and Aviatrix MayCay Beeler is Flying High After Picking Up Her…

MayCay Beeler If you’re a fan of Netflix’s “Narcos” or Tom Cruise’s recent hit “American Made” then you’re in for an even bumpier ride. WASHINGTON (PRWEB) May 04, 2018 Author, aviatrix, and Allen Media Strategies […]

The Seven Most Common Accidents on Construction Sites

May 31, 2018 myadminsite Law Personal Injury Comments Off on The Seven Most Common Accidents on Construction Sites

Brooks Schuelke, Esq.Schuelke Law PLLC Austin, TX (Law Firm Newswire) May 31, 2018 – Generally work on construction sites is considered to be dangerous. However, construction site workers in Texas are at even more risk […]

Matt Starosciak Speaks at the University of Houston Law Center

Marketing pro and author, Matt Starosciak, recently spoke at a continuing legal education program hosted by the University of Houston Law Center about how to effectively market a new solo law… (PRWeb February 02, 2018) […]