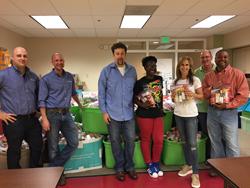 Lynne Khan is an everyday hero. We are just happy to be a part of the incredible work she and the Baltimore Hunger Project are doing for the children of our City

72,000 of Baltimore City's School children are considered "food insecure". The USDA defines food insecurity as meaning consistent access to adequate food is limited by a lack of money and other resources at times during the year. For many families, feeding their children is a financial balancing act. Sometimes, the top priority is paying the mortgage, rent, utilities and other bills, leaving the children unsure of food availability when they are not in school. That's where Baltimore Hunger Project comes in. By discretely tucking a weekend's worth of food into a child's backpack on Friday, they ensure otherwise hungry children are nourished and ready for school on Monday.

"Research has shown that if a child goes hungry over the weekend his/her brain will not be prepared to learn and perform school work until Thursday of the following week," explained Ms. Kahn. "That's not okay. Eventually, these kids will fall further and further behind. Not because they aren't smart or willing to work hard. But, simply because they are hungry. We can help fix that."

As part of its commitment to the BHP, D'Amore Personal Law pledged to fund all of the meals for 25 children at Hawthorne Elementary School for the entire year. Additionally, DPIL will provide volunteers to help pack meals for all 350 children being served by the BHP this year. Mr. D'Amore summed up the firm's new partnership stating, "Lynne Khan is an everyday hero. We are just happy to be a part of the incredible work she and the Baltimore Hunger Project are doing for the children of our City".

Greenberg Traurig’s Ginger Pigott and Roman Fayerberg to Speak at…

December 11, 2018 myadminsite Law Comments Off on Greenberg Traurig’s Ginger Pigott and Roman Fayerberg to Speak at…

MEDIA, Pa. (PRWEB) August 15, 2018 Delaware County full-service law firm Raffaele Puppio is pleased to announce that partners Michael A. Raffaele and J. Patrick Hickey have been selected by their peers for inclusion in […]