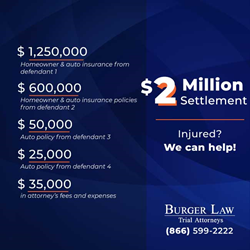 Gary Burger of Burger Law was able to use what has been labeled "creative lawyering" to make sure that his client, Concetta Wills, received the full amount of recovery that she was owed

Car Accidents are already complex lawsuits. Determining fault, the amount of the medical expenses that relate to the accident, and the amounts of recovery that can be obtained from the insurance policy versus the number of medical expenses that have to be covered add additional layers. But what happens when you add in poorly tied down playground equipment, a median wall, and two additional vehicles?

A case like this might seem impossibly complex, but Gary Burger of Burger Law was able to use what has been labeled "creative lawyering" to make sure that his client, Concetta Wills, received the full amount of recovery that she was owed. How much was her settlement? Court documents state that she recovered nearly $2,000,000, and a large portion of it was awarded from a Homeowners' Insurance policy. You may be thinking, "but it was a car accident, how can homeowners insurance be involved?"

In 2010, Wills was involved in a multi-vehicle accident that happened on I-270 in St. Louis, one of the main thoroughfares in the city. The accident was allegedly caused by improperly tied-down playground equipment falling from the back of a truck. Wills swerved to avoid the equipment that fell out of the truck but unfortunately still hit it. This impact caused her to collide with the median wall where she was then subsequently hit by two additional vehicles that were behind her. Wills was seriously injured in the accident and she suffered several different abdominal injuries as well as broken ankles.

Gary pursued Concetta Wills' case to ensure that her rights and recovery were fully protected. Gary was able to collect the maximum allowable amount for the auto insurance policy of the driver of the truck, as well as the maximum allowable through the homeowners insurance. But how is that possible in a car accident claim?

Court documents allege that the driver's daughter was responsible for tying down the playground equipment but failed to properly do so, which subsequently resulted in the equipment falling out of the back of the truck and causing the accident that injured Wills. Gary pursued a recovery against the daughter as well for this alleged action.

Here is a direct link to the article on Burger Law, as well as a related article from the Missouri Lawyer's Weekly with the case number 11SL-CC00410/June 1, 2012.

Gary Burger of Burger Law is a Car Accident Lawyer in St. Louis who prides himself on fighting for the rights and recoveries of those who are injured by reckless and negligent acts. If you have any questions about this case you can call or contact Burger Law now at 314-542-2222 or 618-272-2222.

Richard N. Shapiro Named “Lawyer of the Year” for Railroad…

August 19, 2018 myadminsite Law Comments Off on Richard N. Shapiro Named “Lawyer of the Year” for Railroad…

Mr. Shapiro has practiced personal injury law for over 20 years and is a shareholder with Shapiro & Appleton, P.C. I am deeply honored to receive this prestigious accolade. It is truly humbling to be […]

ez1099 Allows for Non Tax Professionals to Easily Roll Previous Data Forward ez1099 2019 software has been released for business owners to transfer tax data from one year to the next for ease of use. […]