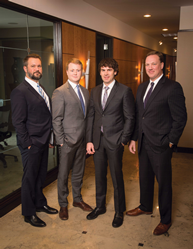 “Our firm is willing to fight until the very end of the appeals process for our clients,” said principal F. Jerome Tapley of Cory Watson Attorneys. “The appellate court confirmed what we already knew.”

The case, Cruz v. Nissan North America, et al., was originally tried in the Superior Court of California for Los Angeles County. The jury’s verdict was affirmed on appeal on Wednesday, February 26.

“This has been a long road for our clients, and as a firm, we take great pride in fighting for justice and helping bring closure to their grieving families,” said Cory Watson principal attorney Ryan Lutz.

Additional representation for the plaintiffs was provided by Paul Kiesel of Kiesel Law LLP, Kirk Wolden of Carter Wolden, as well as Claudia C. Bohorquez and Vicki I. Sarmiento.

“Our firm is willing to fight until the very end of the appeals process for our clients,” said principal F. Jerome Tapley of Cory Watson Attorneys. “The appellate court confirmed what we already knew.”

The case stems from a fatal 2012 crash caused by a critical failure in the braking system of a 2004 Infiniti QX56 SUV. When the Infiniti’s driver collided with a minivan in a Hollywood intersection, all three of the van’s occupants, a mother and her two young daughters, were killed in the impact.

“Nissan acted with reckless disregard for the lives of others,” said principal attorney Brett Turnbull. “It’s only right that Nissan should be held accountable, as their vehicles are still on the road today.”

The Los Angeles jury determined that the incident was 100 percent attributable to the braking system defect in the Nissan-made SUV, and that Nissan had been negligent in failing to recall the vehicle.

“Our hope is that this verdict inspires auto manufacturers like Nissan to step up and take responsibility for the safety of their vehicles. No one should be injured by known product defects like the faulty brakes in this case that are so obviously dangerous,” said Cory Watson attorney Adam W. Pittman.

Los Angeles, CA (Law Firm Newswire) April 30, 2012 – A substantial amount of money may soon be tendered to pay for the outstanding claims made by recording artists for monies owed to them from […]