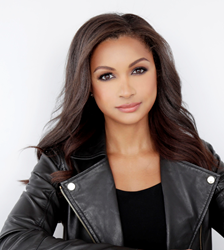 Attorney and TV personality, Eboni K. Williams, is joining REVOLT TV as a co-host on its popular show ‘State of the Culture’. REVOLT made the announcement Wednesday.

“Joining REVOLT is an opportunity for me to impact the culture at a critical time. It’s extremely important for me to have a platform where I can empower people and continue breaking down controversial issues in valuable and useful way,” said Eboni K. Williams.

Williams has become a regular guest expert on the nationally syndicated radio show ‘The Breakfast Club’, which simulcasts on REVOLT TV, and she was previously named by ESSENCE Magazine as one of its ‘Woke 100’. Williams also serves on the Board of Directors for Safe Horizon, a victims assistance organization.

“In this news cycle, we can’t avoid the tough topics and need to come at them with a critical eye. The team I’m joining is known for its no holds barred approach and I’m thrilled to have a seat at the table” said Williams.

Williams is scheduled to make her debut on REVOLT TV’s ‘State of the Culture’ on September 9, alongside Joe Budden, Remy Ma, and Jinx.