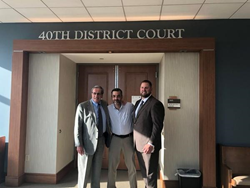 On May 22, 2018, trial lawyer Jason Webster, founder and principal attorney of The Webster Law Firm, obtained a verdict in which his clients, Ginger Thompson and Brad Washington (plaintiffs), received $7,635,000. The case (Case No. 88970, filed in the District Court of Ellis County, Texas, 40th Judicial District) stems from the death of Ginger’s and Brad’s 14-year-old daughter, Avery Washington, who committed suicide as a result of medical negligence.

According to testimony and court documents, Avery Washington presented to Pediatrics Cool Care on March 1, 2012, and complained of depression. She was 14 years old at the time. The Physician Assistant, Jenelle Robinson, PA-C (defendant), under the supervision of Dr. Jose Salguero (defendant), prescribed Avery the antidepressant Celexa, despite the black box warning advising that it not be prescribed to adolescents.

At the time of the prescription, court documents further state, there was no discussion with Avery or her mother regarding the black box warning, and they were not informed that they should read the package insert or closely monitor Avery while she was on this drug. Furthermore, they were never informed that Avery should be evaluated by a psychiatrist or psychologist, and no one ever informed Avery or her mother that Celexa was linked to an increased risk of suicide.

Following this initial visit, Avery had one subsequent office visit with Allyn Kawalek, RN, FNP-BC (defendant), where no warnings were mentioned regarding this drug. On August 14, 2012, Avery committed suicide by overdosing on Diphenhydramine.

During the course of litigation, The Doctors Company, Dr. Salguero’s insurance company, made no offer to settle this claim and The Webster Law Firm took this case to trial. After seven days of trial and testimony from the parties and other witnesses, the jury received the case. After nearly three hours of deliberations, the jury returned the following verdict:

Question 1: Did the negligence, if any, of those named below proximately cause the death of Avery Washington?

Question 2: For each of those named below that you found caused or contributed to the cause the death of Avery Washington, find the percentage of responsibility attributable to each:

Question 3: On the occasion in question, were any of the following named below acting as employees of Pediatrics Cool Care?

Question 4: What sum of money, if paid now in cash, would fairly and reasonably compensates Ginger Thompson and Brad Washington for their damages, if any, resulting from the death of Avery Washington?

1. Pecuniary loss sustained in the past by:

2. Pecuniary loss that, in reasonable probability, will be sustained in the future by:

3. Loss of companionship and society sustained in the past by:

4. Loss of companionship and society that, in reasonable probability, will be sustained in the future by:

5. Mental anguish sustained in the past by:

6. Mental anguish that, in reasonable probability, will be sustained in the future by:

While no amount of money can bring Avery Washington back, justice was served on May 22, 2018.

About The Webster Law Firm
The Webster Law Firm handles a wide range of cases and has obtained many successful results. It focuses on representing individuals injured by another party’s negligence. Personal injury lawyer Jason Webster is a licensed legal representative in Texas, New York, Pennsylvania, Mississippi, and Oklahoma. He is a member of the prestigious American Board of Trial Advocates, American Bar Association, State Bar of Texas, Houston Young Lawyers Association, Association of Trial Lawyers of America, Texas Trial Lawyers Association and Houston Trial Lawyers Association. For more information, please call (713) 396-5197, or visit http://www.thewebsterlawfirm.com. The law office is located at 6200 Savoy Drive, Suite 150, Houston, TX 77036.

Jason Park “If you’re an insurance claims adjuster or attorney, and you’re going to a deposition without a social media discovery done on the opponent or the plaintiff, you’re only going in with half the […]

Justin G. Fok “A frequent inquiry we receive now is ‘I was not selected. Where do I go from here?’ While it is certainly disheartening to learn that you were not selected for H-1B this […]