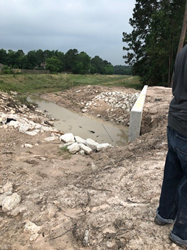 The plaintiffs are seeking recovery from the defendants.

Webster, along with attorney Kimberley M. Spurlock, filed three lawsuits in the District Court of Harris County, Texas (Case Nos. 2019-33415-7, 2019-34366-7, and 2019-36139-7). The case stems from an average rainfall of which the water drained from a Figure Four Partners (defendant) development directly into Elm Grove’s streets and into the plaintiffs’ homes.

Defendants Figure Four and PSWA were developing a plot of land named the “Woodridge Village Development” that borders the northside of the Elm Grove neighborhood. The defendants hired Rebel Contractors as the general contractor to prepare the development for construction.

“The plaintiffs are seeking recovery from the defendants,” said attorney for the plaintiffs Webster, who has been named a Top 10 Personal Injury Attorney by Attorney and Practice Magazine and a Super Lawyer.

Furthermore, each of the defendants in the case recently filed an answer to the lawsuit, denying all allegations, and made a counter claim against the plaintiffs for having their homes flooded.

About The Webster Law Firm
The Webster Law Firm handles a wide range of cases and has obtained many successful results. It focuses on representing individuals injured by another party’s negligence. Personal injury lawyer Jason Webster is a licensed legal representative in Texas, New York, Pennsylvania, Mississippi, and Oklahoma. He is a member of the prestigious American Board of Trial Advocates, American Bar Association, State Bar of Texas, Houston Young Lawyers Association, Association of Trial Lawyers of America, Texas Trial Lawyers Association and Houston Trial Lawyers Association. For more information, please call (713) 396-5197, or visit http://www.thewebsterlawfirm.com. The law office is located at 6200 Savoy Drive, Suite 150, Houston, TX 77036.

“Business interruption and determination as to whether a company can successfully file a claim is certainly teed-up in the line of important issues which will bubble to the top in coming weeks,” said Perlmuter. CLEVELAND […]

Vcheck Global Continues Strategic Expansion With the Addition of…

October 25, 2018 myadminsite Law Firms Comments Off on Vcheck Global Continues Strategic Expansion With the Addition of…

LOS ANGELES (PRWEB) October 25, 2018 Vcheck Global, a leading provider of business to business due diligence background checks, is proud to announce the hiring of Brendan Binkoski as Director of Investigators. Brendan brings over […]