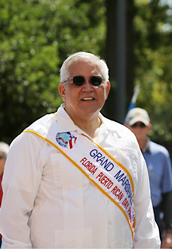 I was in the very first Puerto Rican Parade in New York in the 1950’s, so it was a tremendous honor to be named the Grand Marshall of the parade last year as I’m sure it is for [Orlando] Mayor [Buddy] Dyer this year.

The free Puerto Rican Parade and Festival takes place on Saturday, April 27, from 11 a.m. to 10 p.m.. The parade starts at the intersection of Orange Avenue and Concord Street and ends with a festival at the Dr. Phillips Performing Arts Center, 445 S. Magnolia Avenue, Orlando, FL.

“I was in the very first Puerto Rican Parade in New York in the 1950’s, so it was a tremendous honor to be named the Grand Marshall of the parade last year as I’m sure it is for [Orlando] Mayor [Buddy] Dyer this year. Although this is only their third year in Florida, this parade is a long-standing tradition in our culture and a source of much pride,” said Suarez.

Added Christian Suarez, “The parade will be dedicated to Orlando Police Chief Orlando Rolón, who is the city’s first Hispanic police chief and from Puerto Rico.”

Additionally, the parade is honoring the municipality of Guanica. The FPRP has worked with the Mayor of Guanica, Mr. Santos Sera, to identify a student orchestra from Guanica, Puerto Rico. The parade flew students from Puerto Rico to Orlando to perform at the University of Central Florida’s Barbara Ying Center on April 24.

This revered annual event is a celebration of Puerto Rican culture, heritage and pride. The theme of this year’s parade is “Healthcare is not an option, it is a necessity.” The parade will include marching bands, cultural organizations, government organizations, local small businesses, as well as industry titan The Walt Disney Company. Last year Mickey and Minnie Mouse participated in the parade and the rumor is that the entire cast will make an appearance in 2019.

This year the festival will include a health fair triage center inside of City Hall. Here, parade and festival attendees will have a chance to enjoy an entire range of health services including mammograms and pap smears at no cost. At the end of the parade a music festival will be held, which includes delicious food, craft vendors and live music from J Alvarez, Juan Luis Juancho, Nio Garcia, Casper “El Magico,” Julio Cesar Sanabria, Victor Sanabria, Jincho El Rustico, Elysanij and many more.

Christian Suarez serves on the board of directors for the parade as the Parliamentarian, and has since its inception three years ago. He also serves the parade on the education committee. His role on the education committee consists of identifying and locating scholarship recipients, reviewing essay submissions, and awarding five $2,000 scholarships to students. He also works with the local high school marching bands and dance groups on the parade route and throughout the school year.

Anthony Suarez, who has over 41 years of experience, is an award-winning attorney. He takes on high-profile criminal trials in Florida, as well as acting as a real estate broker and mortgage broker in New York and Florida.

MADE SAFE® and the Plastic Pollution Coalition Announce New…

June 15, 2020 myadminsite Law Comments Off on MADE SAFE® and the Plastic Pollution Coalition Announce New…

The Healthy Pregnancy Guide: The Best Tips, Products & Tools for a Healthier Pregnancy & Planet During a time when people are now more concerned than ever with their health and protecting their immune systems, […]

“Supporting organizations that make an impact in the lives of Miami-Dade County’s residents and developing relationships with our business community has been a priority for Greenberg Traurig since our founding 52 years ago,” said Jaret […]