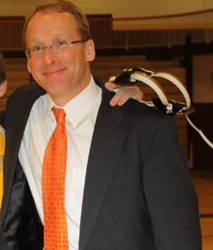 As a lifelong resident of Lake County, I am honored to continue my judicial career and run for Circuit Judge in a community that means so much to me and my family.

On November 3, 2017, the Illinois Supreme Court appointed Joseph V. Salvi a Circuit Court Judge for the Nineteenth Judicial Circuit, Lake County, Fifth Subcircuit. Judge Salvi’s appointment will take effect on January 2, 2018 and he will be seeking election for Circuit Court Judge in the November 2018 general election.

Mr. Salvi was first appointed Associate Judge of the 19th Judicial Circuit on January 2, 2013, where he was assigned to the Criminal Division until 2015 and most recently the Civil/Family Division.

Prior to working as a judge, Mr. Salvi was a Partner at the Lake Zurich general practice law firm Salvi, Salvi & Wifler, P.C. where he handled both civil and criminal cases, as well as transactional matters in real estate, business and estate administration. From 1992 until 2012, Mr. Salvi served as Guardian ad Litem for disabled individuals.

Aside from his extensive legal career in Lake County, Mr. Salvi has strong personal ties to the Lake Zurich, Wauconda. His father, Albert Salvi, started his private legal practice in Lake Zurich in the late 1950s and later went on to become a local magistrate judge. Mr. Salvi, the eighth of nine children, was born and raised in Lake Zurich, Ill. and attended Carmel High School. After attending Knox College (B.A. 1988) and Chicago Kent College of Law (J.D. 1991), Mr. Salvi returned to Lake County with his wife, Bridget, to raise his family in Hawthorn Woods. Mr. Salvi’s children attended school in Lake County and played sports in the area. Mr. Salvi coached teams for the Lake Zurich Baseball and Softball Association, the Lake County Lightning and Ela Soccer, where he also previously served as director. Additionally, he is a parishioner of St. Francis de Sales in Lake Zurich.

“As a lifelong resident of Lake County, I am honored to continue my judicial career and run for Circuit Judge in a community that means so much to me and my family. If elected, I hope to continue to build strong relationships with the community and demonstrate a strong commitment to the county and bar,” Honorable Joseph V. Salvi said.

For more information or to schedule an interview, please contact Judge Salvi at lakejudgejoe(at)gmail(dot)com.

We are excited to be part of Boo bash for our third year. We enjoy being able to serve our Fisher’s community and interacting with the families and local businesses FISHERS, Ind. (PRWEB) October 26, […]

Attorney’s perspective on the possibility of DUI expungements in…

December 18, 2020 myadminsite Law Firms Comments Off on Attorney’s perspective on the possibility of DUI expungements in…

NORTHVILLE, Mich. (PRWEB) December 18, 2020 Earlier this year in Michigan a sweeping bill package was passed and signed into law by Governor Gretchen Whitmer, reforming the criminal records expungement process by increasing the number […]

WASHINGTON (PRWEB) February 28, 2019 The judge in an Urbana, IL kidnapping and murder trial has ruled that DNA test results produced by STRmix™ are admissible in the case. In denying a motion by attorneys […]