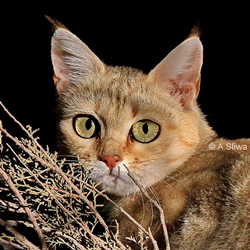 Small wildcats around the world are threatened by numerous factors, including habitat loss, hunting and interbreeding. With so much environmental change happening, it’s important we do everything in our power to protect biodiversity right now.

Nearly three hundred free-roaming cats have been sterilized and vaccinated by Alley Cat Rescue’s international partnership to protect African Wildcats in South Africa. The project is protecting vulnerable populations of genetically pure African wildcats (AWCs) from hybridization by sterilizing free-roaming domestic and stray cats who live around their habitat in the Kruger National Park.

The effort, spearheaded by Alley Cat Rescue (ACR), is bringing South Africa-based rescue and cat advocacy groups together around a common goal. With the support of local veterinarians and scientists, domestic cats from the targeted border areas will receive health exams and rabies vaccinations, and will also be spayed or neutered. The park’s borders in South Africa are where AWCs and domestic cats from nearby urban and settled areas can most often come into contact.

Safeguarding the genetic integrity of the wild cat is supported by Invasive Species Specialist, Dr. Llewellyn Foxcroft, who said: “Outside the park, one option is to try capture, neuter and return feral cats,” Llewellyn explains, “The reasoning here is that if a cat is removed, another will fill its home range and thus the problem is not solved. However, by returning cats which cannot breed, the home range is maintained and other cats are naturally excluded from the territory.” This approach is, however, resource intensive. ACR is working to build the infrastructure and revenue stream needed to ensure that the program will be ongoing.

ACR is following the advice of Dr. Foxcroft and using the Trap-Neuter-Return (TNR) method to capture, treat, and then return the cats to their territory. TNR is widely practiced in the U.S. and abroad and is known as the safest and most humane way to manage populations of outdoor cats.

“The African wildcat is the ancestor of our domestic cats, the one who started our modern love affair with cats,” said Louise Holton, President of Alley Cat Rescue and a native of South Africa. “Small wildcats around the world are threatened by numerous factors, including habitat loss, hunting and interbreeding. With so much environmental change happening, it’s important we do everything in our power to protect biodiversity right now,” Holton continued.

For the multi-year project, Alley Cat Rescue is spearheading the efforts in South Africa, as well as providing humane traps. The project has also received generous support from the Ayers Wild Cat Conservation Fund, a foundation run by Helaine and Jon Ayers. Jon Ayers is the CEO of IDEXX Laboratories, a multi-national company that produces products and services for various animal-related applications.

ACR is currently looking for additional pharmaceutical companies in South Africa, as well as cat food companies, to get involved and provide further support for the growing project. A similar strategy is taking place in Scotland to help the endangered Scottish Wildcat.

The African Wildcat lives throughout the continent of Africa and parts of Asia and the Middle East. It is currently listed on Appendix II of the Convention on International Trade in Endangered Species of Wild Fauna and Flora, an international agreement among countries to protect threatened and endangered species. As with other Appendix II species, African Wildcats are not immediately threatened with extinction, but do need protection in order to ensure their survival.

ACR is an International nonprofit organization dedicated to the welfare of all cats: domestic, stray, abandoned, and feral. ACR advocates for humane, nonlethal control of feral cats. ACR has been awarded the Independent Charities of America’s “Best in America” Seal of Approval, and its newsletter has won several awards from the Cat Writers’ Association.

ACR’s Guide to Managing Community Cats was also awarded a Certificate of Excellence by the CWA.

Valuation in the Context of a Fraudulent Transfer or Preference Attack,” on 12/7, 2pm CST Through West LegalEdcenter

December 4, 2017 myadminsite Law Comments Off on Valuation in the Context of a Fraudulent Transfer or Preference Attack,” on 12/7, 2pm CST Through West LegalEdcenter

There are several tests that financial analysts use to determine solvency and adequate capitalization of a business. Chicago, Illinois (PRWEB) December 04, 2017 Valuation is used by market participants to determine the price they are […]

“We wanted our second industry news feed to be about meat and potatoes litigation – literally, so our bar partners across the country and their members can see how tracking filed litigation leads to new […]

Morae and Mayer Brown Collaborate to Ease Transition from LIBOR to…

May 21, 2020 myadminsite Law Comments Off on Morae and Mayer Brown Collaborate to Ease Transition from LIBOR to…

Company Logo “We are working to create a ‘one-stop shop’ for our clients preparing for the discontinuation of LIBOR, and joining forces with Morae is confirmation of Mayer Brown’s sustained efforts to deliver full-service excellence,” […]