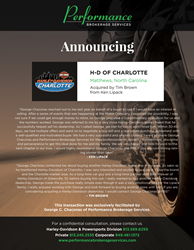 Harley-Davidson of Charlotte in North Carolina

As soon as George mentioned Harley-Davidson of Charlotte, I was very interested and excited to acquire it. - Tim Brown

Performance Brokerage Services, a new car and Harley-Davidson dealership broker is pleased to announce the sale of Harley-Davidson of Charlotte in Matthews, North Carolina from Ken Lipack to Tim Brown.

Harley-Davidson of Charlotte was established in the early 1920’s. The dealership underwent many ownership changes and relocations until it was acquired on February 2, 1993 by Ken and Ron Lipack. Ken began his love of motorcycles at age 12 when he rode his first dirt bike. Since graduating college, Ken has only worked in the motorcycle industry pursuing his dream of one day becoming the proud owner of a Harley-Davidson dealership. Ken is a past elected member and President of Harley-Davidson’s Dealer Advisory Council. He has also served for several years on Harley-Davidson’s International Retail 20/20 Dealer Engagement Group and served as a Board Member of the Carolina’s Harley-Davidson Dealer Association. Following the sale of his dealership Lipack commented, “George Chaconas was referred to me by a very close Harley-Davidson dealer friend that he successfully helped sell his dealership. I was not sure if we could get enough money to retire, so George prepared a complimentary evaluation for us and the numbers worked. I called George, we met for lunch, and I hired him. Within 30-45 days, we had multiple offers and went on to negotiate with a well-qualified and motivated buyer. We had a very successful and smooth closing. I want to thank George Chaconas and Performance Brokerage Services for their professionalism, tenacity, commitment, discipline and perseverance to get this deal done for me and my family. We are very happy and look forward to the next chapter in our lives.”

The dealership will operate under its new name, Independence Harley-Davidson, and will remain located at 9205 East Independence Boulevard in Matthews, North Carolina.

George C. Chaconas, the exclusive agent for this transaction and the head of the National Harley-Davidson and Powersports Division for Performance Brokerage Services commented, “I feel privileged to represent such an iconic business with as much history as Harley-Davidson of Charlotte. It was a pleasure helping the Lipack family with divesting of their dealership and securing enough money to retire and capitalize on their many years of hard work. I would like to congratulate Tim Brown and I am very confident that he will see much success with his acquisition. I look forward to helping him continue to grow his portfolio.”

The company offers a different approach to the automotive, commercial truck, Harley-Davidson and Powersports industries by providing complimentary dealership assessments, no upfront fees, no reimbursement of costs and is paid a success fee only. Performance Brokerage Services gets paid only after the client gets paid.

LAS VEGAS (PRWEB) September 05, 2018 Superior Court Reporters & Deposition Services is a court reporting firm that specializes in Hearings, Trials, and Appeals. Lisa Lemus who started out as a freelance court reporter in […]

Omnivere is Officially Certified Under the EU-U.S. Privacy Shield

October 25, 2018 myadminsite Law Comments Off on Omnivere is Officially Certified Under the EU-U.S. Privacy Shield

NEW YORK (PRWEB) October 25, 2018 Omnivere is proud to announce that we are officially certified by the European Commission and the U.S. Department of Commerce under the EU-U.S. Privacy Shield Framework. We will continue […]